Mozart through the looking-glass

miércoles, 10 de marzo de 2010
London, viernes, 5 de febrero de 2010. The Royal Opera House, Covent Garden. Wolfgang Amadeus Mozart, Così fan tutte. Sir Jonathan Miller, Director. Daniel Dooner, Revival director. Sir Jonathan Miller, Tim Blazdell, Andrew Jameson, Colin Maxwell, Catherine Smith & Anthony Waterman, Designs. Sir Jonathan Miller & John Charlton, Lighting design. Charles Castronovo (Ferrando), Troy Cook (Guglielmo), William Schimell (Don Alfonso), Sally Matthews (Fiordiligi), Nino Surguladze (Dorabella), Helene Schneiderman (Despina). Orchestra and Chorus of the Royal Opera House, Covent Garden. Renato Balsadonna, Chorus director. Julia Jones, Conductor.
0,0002359 For a generation brought up listening to opera on CD, it’s commonplace to say that the form is mainly about the music. After all, the stories of Il Trovatore or Die Zauberflöte would be unlikely to be remembered were it not for the power of the scores that underline them. Even the most talented director is hard-pressed to add dramatic tension to an opera such as Messiaen’s Saint François d’Assise, and the vogue for concert performances would suggest that as audiences we are happy to dispense with theatricality and simply enjoy the composer’s music on its own terms.

At the same time, it’s refreshing to be reminded just how much an innovative production can galvanise and determine the musical dimensions of an operatic performance, lifting a potentially ordinary evening into the realms of something genuinely memorable. Jonathan Miller’s staging of Così Fan Tutte is one such example: currently being revived at Covent Garden for the seventh time, it features no major-league stars amongst its cast and yet inspires all to give excellent performances by virtue of its brilliantly witty, sexy interpretation of the piece. Updated to a broadly contemporary setting - supposedly Naples but more likely South Kensington - it happily exploits the 21st century paraphernalia of laptops, mobile phones and Starbucks coffee to dramatise the materialism and narcissism at the heart of the characters’ lives. Despina here functions less as a wily chambermaid than an over-worked PA, happily munching a doughnut as she doles out advice, and when Ferrando and Guglielmo head for war it is impossible not to think of Baghdad as the obvious destination for their bogus journey.

At the centre of Miller’s conception is the mirror, which dominates the stage from start to finish and which reifies the opera’s relentless obsession with appearance. Starting as a comic prop, it gradually becomes the medium by which the sisters question their own desires and identities as they fall in love with each other’s partners under an assumed persona. Accompanying this are the unkempt surroundings of their flat, a study in ‘shabby chic’ in which the scattered cushions and omnipresent dustsheets evoke a world where nothing is permanently fixed. Presiding over all the action is Don Alfonso, the cynical philosopher who initiates the whole proceedings and whose absence of motivation is a riddle at the heart of the opera. Is his experiment merely a selfless demonstration of truth or, as Miller intimates, is his own experience with Despina to explain for his jaundiced view of love? 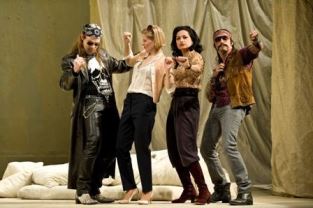 © 2010 by Richard H Smith
Leading the cast in every respect was Sally Matthews, whose powerhouse performance as Fiordiligi added another notch to her impressive resume at Covent Garden. Lithe and beautiful in her tailored suits, she rose confidently to the challenge of ‘Come Scoglio’ and delivered a melting ‘Per Pietà’, both arias allowing her to demonstrate impressive coloratura across a very wide range. The former in particular was a masterclass in operatic direction, with Fiordiligi’s hysterical tirade matched by perfectly calculated physical gestures which encouraged Matthews to push her voice to previously-unheard extremes. I only hope this daunting role doesn’t damage her instrument in the process. Alongside her, Nino Surguladze offered an appealingly minx-like Dorabella, the rich mezzo core to her voice aptly suited to suggest the more worldly-wise elements of her character. She confidently nailed here set-piece arias and throughout impressed as an intelligent ensemble-player; an enjoyable Covent Garden debut. 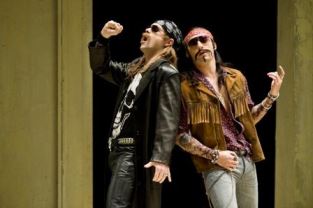 © 2010 by Richard H Smith
As their two partners, Charles Castronovo and Troy Cook offered appropriately suave, boyish performances which were well-matched to their female counterparts. As Ferrando, Castronovo supplied his usual fund of ringing, golden tone and charted his character’s emotional journey with considerable success, even if his showpiece number, ‘Un Aura Amorosa’ wasn’t ideally mellifluous and was compromised by an aspirated legato line. In the less-desirable role of Guglielmo, Cook contributed yet another solid house debut, built upon a bedrock of focused baritone singing and a natural flair for comedy. He visibly enjoyed playing the cock-sure punk and I would welcome seeing him in a role that allowed greater room for musico-dramatic expression. 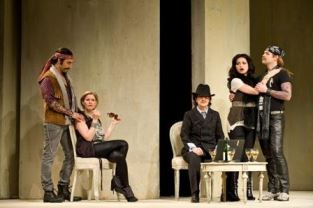 © 2010 by Richard H Smith
The two senior roles were taken by highly-seasoned professionals who brought decades of experience to bear on their theatrical performances. As Despina, Helene Schneidermann offered a wonderfully mature, vibrant interpretation which was perhaps displayed at its finest during the recitative. Her voice is no longer as secure as once it was, but she punctured the sisters' illusions with delicious panache and earned a rousing ovation from the audience. She made an intriguing contrast to William Shimell's Don Alfonso, her carefree bubbliness representing an alternative response to his detached, enigmatic and ultimately world-weary approach to the character. The comparative lack of lustre to his tone actually worked to his dramatic advantage here, evoking someone who has stared deeply into the heart of life and has resolved himself to its moral vacuum.

In the pit Julia Jones gave a finely-paced, nimble account of the score which matched the general tone of the production. Perhaps other conductors have found even more in Mozart's exquisite part-writing or captured the score's fluctuations in mood with greater finesse, but it was certainly an impressive debut and one that merited further invitation. Like the cast, one felt, she had been inspired by Miller's direction to breathe fresh life into the score, making Così as funny, thought-provoking and audience-pleasing as it ought to be. There might be more glamorous casts around (natch Roschmann and Garanca in the last revival) but on this occasion - as in the opera - the director had the last laugh.