Between words and notes

Nowhere is such coexistence more evident than in the role of Lady Macbeth, which, at least ideally, Verdi conceived in opposition to traditional belcanto roles. As he wrote in a letter to librettist Salvatore Cammarano, Verdi wanted his character to look “ugly and evil,” and to be in possess of a “harsh, stifled and hollow voice.” He went as far as writing “I would like the Lady not to sing.” Yet, Lady Macbeth has to sing a wealth of stylistically diverse music, such as her justly famous entrance aria, provided with a concluding cabaletta rich in vocal virtuosity, an equally brilliant strophic toast during the act-two finale, and two breath-taking solo pieces (the aria ‘La luce langue’ and the dramatically stunning Sleepwalking Scene). It is because this tension between dramatic intentions and musical substance permeates the whole score that Verdi’s Macbeth constitutes such a challenging opera. 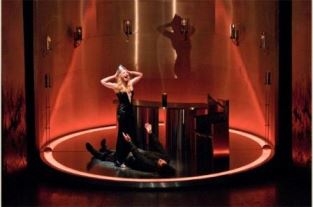 This past October the Lyric Opera of Chicago undertook the challenge, and opened its 2010-’11 season with a new production of the work, created by Chicago Shakespeare Theater director Barbara Gaines. Gaines’s confidence with Shakespearean dramas resulted in a visually fresh staging. A huge revolving steel structure dominated the stage. Its curves and shining surface were inspired by the Pritzker Pavillion in Millenium Park, Chicago. In Gaines’s view, the association between steel and curves points to the masculine and feminine aspects embodied in power, which in Verdi’s opera are portrayed by Macbeth and his wife. According to the director, power is no historically contingent phenomenon, and consequently, Shakespeare’s Scotland is turned into a neutral space. Modern costumes coexist with other clothing that generically points to a more or less indefinite past (e.g. Macbeth’s and Banquo’s armors, or the costumes of the Scottish refugees in the opening of act 4.) A central aspect of the production, one which Gaines derives from Verdi’s own reworking of Shakespeare’s text, is the pivotal role of the witches throughout the entire opera. Far from being confined to scenes in act 1 and 3, the witches are manipulating forces during many turning points of the plot, such as the scene of Banquo’s assassination. Here, Banquo’s son does not merely escape from his father’s killers, but is rescued by a witch, flying away with her to safety. 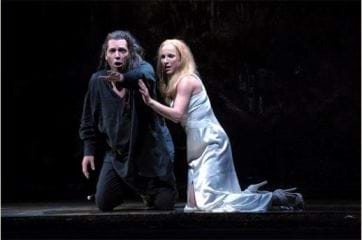 The acting of the singers was perfectly integrated in Gaines’s reading of the opera, and it positively contributed to the outcome of the production. In fact, at least in one case it is possible to speculate that the casting was decided more in terms of visual appeal than of musical merits. German soprano Nadja Michael matched Verdi’s ideas about the role of Lady Macbeth, with the only exception that she is far from ugly. Rather, her beauty and sensual acting combined with Gaines’s devilish characterization of the role created a modern and powerful incarnation of Eros and Thanatos. Unfortunately her vocal rendition was not of the same level. Michael featured an astonishingly powerful voice, but also showed severe problems in managing such a cumbersome instrument. Her top register was often stretched, and she avoided sustaining high notes as much as possible. The middle of her voice lacked appropriate support, which resulted in several problems of intonation. These technical issues seriously affected the rendition of the most demanding belcanto passages. Yet, Michael is one of those singers that truly manage to act with their voice: as a result, the many technical flaws were compensated by inspired expressive intentions, such as her rapturous rendition of ‘La luce langue’. 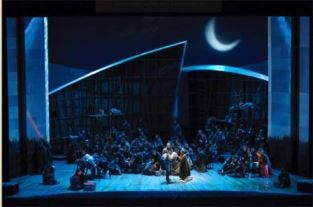 Momento de la representación. Acto IV
© 2010 by Robert Kusel. Gentileza de la Chicago Lyric Opera
Thomas Hampson (Macbeth) was another talented singing actor, and the veritable star of the show. In his case no technical problems limited his performance. He delivered Macbeth’s music with constant care to the clarity of the words, and he created an introspective character -a man subjugated by his wife’s lust and eagerness. Only in a few passages I had the impression that Verdi’s writing was a bit too dramatic for his lyrical voice. Stefan Kocan’s rendition of Banquo was rather pale and musically uninteresting. Tenor Leonardo Capalbo, on the other hand, made the most of Macduff’s aria in the fourth act, which he sang with warmth and excellent taste. Too bad the opera did not provide him with other moments to shine. I really look forward to listening to him again in bigger roles. Among the secondary roles, Carter Scott (Lady in Waiting and Lady Banquo) featured a secure voice that let her get the better of Nadja Michael in the ensembles.

Renato Palumbo confirmed once more his predilection for Italian melodramma. His orchestra sounded consistently bold and yet he managed to create the best possible conditions for the singers. Unlike his Ernani last year, however, I found his approach to the score less inspired and rich in details. Nonetheless, he infused the music (yes, even the too-often execrated um-paa-paahs) with a vivid sense of drama. It is unlikely that either Palumbo’s conducting or the whole production will be the ultimate word about Verdi’s intriguing work. They were nonetheless worth a night at the opera.