Yet, he had never faced the challenge of writing an opera based on a Shakespeare text until 1959, when he was commissioned to write a new work to be performed the following year at the Aldeburgh Festival. Due to the short deadline for the composition, Britten had to depart from his usual working habits: Instead of requesting a new libretto to be written from scratch, he decided to revise Shakespeare’s A Midsummer Night’s Dream turning it into an opera. The choice of Shakespeare’s text marked a significant turn from the violent atmosphere that pervaded some of the composer’s earlier operas, inspiring instead a more eerie and mysterious one.

Britten evoked it with his painstaking care for textural and timbre details. The composer’s taste for suggestive sonic effects extended not only to the orchestration, but also to his vocal choices. In particular, his decision to cast a countertenor in a leading role was path breaking. At this time, while England had a longstanding choral tradition that regularly featured countertenors, such male singers performing in falsetto were usually confined to well-established choral institutions and were never employed in opera houses. By tailoring the role of Oberon to one of the most famous countertenors of the time, Alfred Deller -one of the earliest stars of the early-music movement- Britten broke this taboo. In his view, Deller’s pure, ethereal voice perfectly fit the characterization of a supernatural creature such as Oberon, the Prince of Fairies. 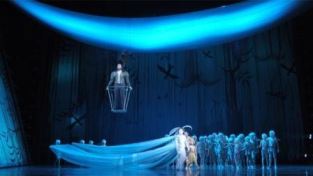 © 2010 by Dan Rest
The new production of A Midsummer Night’s Dream presented at the Lyric Opera of Chicago also featured one of today’s finest countertenors, David Daniels. Unlike Deller, who had no stage experience when Britten chose him, Daniels has made opera a focal point of his career. His authoritative portrayal of Handel’s Giulio Cesare is still vivid among Chicagoan opera-goers, and later this season Daniels will be back at the Lyric for another Handel work, Hercules. Oberon has long been one of Daniel’s cornerstone roles and his interpretation has been acclaimed in many of the top-ranked opera houses around the world. His performance at the Lyric displayed immaculate musicianship and expressive rendition of Shakespeare’s words. However, I sometimes felt that the role lay too low in his voice and that, consequently, his overall rendition lacked vocal presence. This was particularly evident in his entrance scene with Tytania, when Anna Christie’s penetrating timbre overpowered Daniel’s. Christie’s bright coloratura was perfectly suited for the Queen of Fairies. She dominated Britten’s demanding vocal writing with remarkable aplomb, and the occasionally sour aftertaste of her tones sounded particularly effective in providing the character with a whimsical touch. 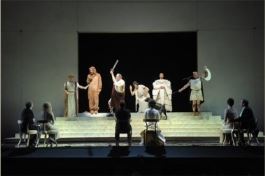 © 2010 by Dan Rest
Erin Wall was the perfect lyrical counterpart to Christie’s sparkle. I found her much more convincing as Helena than as Konstanze in Mozart’s Abduction from the Seraglio two years ago. She appeared much more confident with the whining domesticity of Britten’s character than with Mozart’s fireworks. Her timbre perfectly matched Elizabeth DeShong’s, who interpreted Hermia, her fictitious love rival in the opera, with rich, warm sounds and expressive intensity. Tenor Shawn Mathey made an outstanding Lyric debut as Lysender. His impeccable vocal skills were paired with equally compelling acting abilities -definitely a singer whose career should be followed with interest. On the other hand, Lucas Meachem was too vociferous even for such a crude character as Demetrius. Peter Rose’s show-stealing Bottom dominated the well-balanced troupe of actors (Sam Handley as Quince, Keith Jameson as Flute, Paul Scholten as Starveling, James Kryshak as Snout, and Wilbur Pauly as Snug). Craig Irvin was a sonorous Theseus, and Kelley O’Connor a rather pale Hippolyta. The four Fairies were sung by a remarkable quartet of soloists from the Anima Chorus -Young Singers of Greater Chicago. The young Scottish conductor Rory MacDonald, in his Lyric Opera debut, led the orchestra in a performance that sounded perfectly calibrated to the needs of Britten’s score. Actor Esteban Andres Cruz contributed to the success of the evening with his agile and sardonic interpretation of Puck. 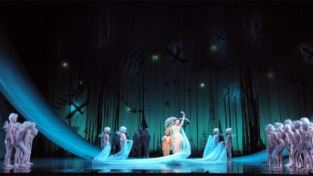 © 2010 by Dan Rest
The Lyric's performances profited greatly from Neil Armfield’s suggestive staging. Faithful to the mysterious atmosphere that permeates most of the opera, Armfield created a visual frame that placed as much attention on the singers’ acting as it was delicate in the depiction of the many situations of the plot. The combination of traditional costumes for the fairies, and the utterly modern clothing of the humans was particularly effective -almost as to signal the eternal dimension of Oberon’s and Tytania’s world and the ever-changing course of human life. Dale Ferguson’s sets were dominated by a waving green veil representing the enchanted forest, and the careful lighting design by Damien Cooper provided additional charm to a very enjoyable spectacle.