In Chicago, the 1978 western-movie-inspired staging by Harold Prince was revived under the supervision of Vincente Liotta. The visual conception of the opera was predictable in its traditionalism. The only surprising moment was Minnie’s entrance on a miner’s car in the third act to save Dick Johnson from being hanged. However, since this scene is the moment of highest dramatic tension in the act, I found it inappropriately deflated by the spectators’ laughs. 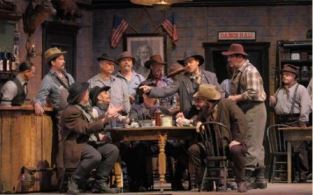 © 2011 by Dan Rest. Lyric Opera of Chicago
This choice did not seem to bother Voigt that much. Rather, throughout the performance, she looked as if she were in her natural element in this production. Her acting was more convincing than in last year’s Tosca and, especially in the second act, her attempts to construct a credible character were noticeable. Nevertheless, her voice sounded under strain. Her top notes, still impressively sonorous, were often shrill, while her middle register, where Minnie’s part lies for most of the opera, was overwhelmed by the orchestra from time to time. These vocal problems aside, what I found lacking in Deborah Voigt’s Minnie was the effort into creating an interpretation that pays justice to the complexity of the character. It seemed to me she was at ease at playing the tough girl (the card scene, by this point of view, was remarkable), but less so when Minnie’s virginal nature came to surface. As opera scholar Emanuele Senici has argued, within the Italian opera tradition of the long nineteenth century Minnie is the last role that belongs to the category of the alpine virgins -female characters whose purity is reflected by the mountain landscape in which they live. It is this dimension that was missing in Voigt’s reading: she was definitely a gun-and-whiskey gal, but not a fanciulla. 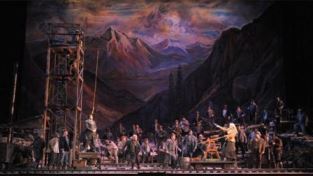 The night I saw the production, the performance also suffered from Marcello Giordani’s defection for family reasons. American tenor Roy Cornelius Smith took over the demanding role of Dick Johnson. He showed remarkable command of the technical challenges of his part and his top register sounded particularly bold and sonorous. However, due to the circumstances, his characterization of the role was only vaguely outlined. At the end of the evening, the audience rewarded him with a standing ovation.

Among the principle singers, only Italian baritone Marco Vratogna delivered an accomplished interpretation of his character. Vratogna does not possess a naturally powerful voice. Yet, it is well projected and reaches the furthest seats. In addition, Vratogna’s subtle phrasing, skillful articulation of the text and attractive physical presence contributed to the definition of a well-rounded character. Too often other singers have treated Jake Rance as a one-dimensional negative role. Vratogna, on the other hand, rendered the character as a multi-faceted and almost tormented human being.

The highlight of the performance, however, was Andrew Davis’s conducting. Under his baton, the house orchestra met all the challenges of the score with elegance, energy and technical security. Davis carefully avoided accentuating the magniloquent aspects of the opera, in order to emphasize its most cutting-edge stylistic features. The result sounded extremely convincing: even if deprived of some of its epic grandeur, Puccini’s music gained in tension and narrative speed. Thanks to Davis, La Fanciulla del West came out as a powerful piece of modern music theater.