Les Contes d’Hoffman is considered an extravagance with good reason. The composer, Jacques Offenbach, conceived it as his major operatic undertaking, but died before completing it in 1880. Since then, the work has been a thorn in the flesh of composers and musicologists. At present, no two versions of the score agree on the amount of music the opera is supposed to contain or on its genre. Offenbach called it opéra fantastique, leaving it open whether he wanted it fully-sung or featuring spoken dialogues. Then, of course, there is the subject of the libretto -a bizarre journey into the drunken mind of one of the most visionary artists of the Romantic period, E.T.A. Hoffmann. The plot, constructed by freely reworking some of Hoffmann’s own short stories, is populated with mechanic dolls, stuttering and deaf servants, devilish doctors, singers killed by their own passion for singing, and soul-stealing courtesans.

Such a work provides plenty of opportunities for inventive staging and lavish singing. The Lyric Opera of Chicago opened its season with Offenbach’s uncompleted opera aligning an entertaining production dominated by strong singers. One does not expect radical ideas or a subversive reading of the work from director Nicolas Joël. Yet, he manages to combine visual elegance with the sense of fascination for technological innovation and progress that permeates the whole opera by setting it among the shining glass and iron structures of the Crystal Palace in London, site of the 1851 Great Exhibition. 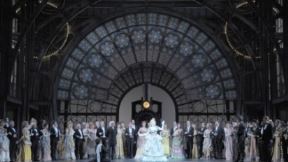 The singers and chorus play convincingly within this frame. The main roles were vividly characterized. Matthew Polenzani, in particular, was formidable in his portrayal of the German poet, and James Morris proved once more an all-round entertainer as the four villains. Even more impressive was the engaged acting of each chorus member. The spectators’ enjoyment for the production reached its peak in Olympia’s act, thanks to Anna Christy’s sparkling rendition of Hoffmann’s beloved mechanic doll, and Rodell Rosel’s over-the-top Cochenille. While Antonia’s act the production featured inventive moments in the production, Giulietta’s was less interesting -the main visual attraction being a rather stereotypical representation of its Venetian atmosphere. 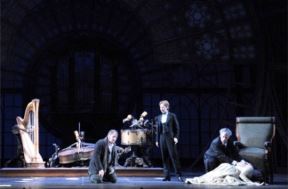 The musical performance had many strong points and some minor flaws. Conductor Emmanuel Villaume proved himself particularly in tune with French repertory. He led the house orchestra with refinement, appropriate exuberance, and intensity. Tenor Matthew Polenzani stole the show as Hoffmann. At first his gentle, lyrical voice may not seem a right fit for the role, which becomes heavier and heavier during the course of the opera. Yet, as his career is gradually steering towards more dramatic parts (he will soon make his debut as Des Grieux in Massenet’s Manon), he skillfully negotiated the different vocal demands of his character. Throughout the performance he maintained the natural lightness of his timbre, without trying to artificially darken it in the more dramatic passages, and carefully worked on the enunciation of the words in order to make them more incisive. At any moment, however, one is conquered by his exquisite musicianship, dreamy phrasing, and masterful control of the dynamics (his floating pianissimos were precious gems).

Although none of the other singers reached the same high standard, all contributed positively to the success of the performance. James Morris’s decades-long experience with the opera is manifested in his magnetic acting and in his subtle rendition of the four embodiments of evil. Although he still maintains a superbly sonorous timbre, he sounded strained by the time of his delivery of 'Scintilles, diamants', the interpolated couplets in Giulietta’s act. Since this piece was a spurious addition to the opera, and one which does not add any credit to Morris’s performance, perhaps it would have been advisable to omit it. Anna Christie peppered her role with brilliance and wit, but I missed an extra touch of clockwork precision in the coloratura passages and high notes of the celebrated aria 'Les oiseaux dans la charmille'. Erin Wall was an impressive Antonia. Her creamy, full, rounded voice fit the role like a glove, and her mature musicality and beautiful legato made it even more credible. At the end of the demanding trio with Antonia’s mother and Dr. Miracle, her high C-sharp sounded a little stretched, but she was so convincing throughout the act that one is tempted to dramatize also this minor imperfection as the ultimate effort of the character to triumph with her voice at the expenses of her life. Emily Fons was an enjoyable Nicklausse, although her French still needs some work. Alyson Cambridge was a rather pale Giulietta, but, to be true, she was not given many opportunities to show off, since all her solo pieces were cut.

In sum, with this enjoyable attempt to come to term with Offenbach’s operatic extravagance, the Lyric met the approbation of the audience, and started off its season on the right foot.