No Cure for Opera Addicts 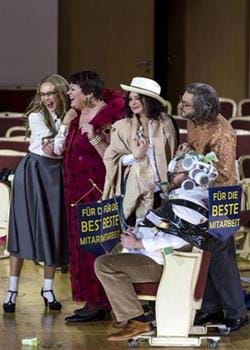 Tcherniakov: Betrothal in a Monastery © Ruth and Martin Walz, 2019

Dmitri Tcherniakov has been responsible for some of the most intelligent productions at the Staatsoper Berlin in recent years. Yet between his characters, who range from emotionally stunted to wholly traumatised, and his aesthetic, which tends toward deadening blandness (Die Zarenbraut, set in a glossy television studio), uncomfortable squalor (his magnificent Parsifal) or sometimes both at once (last season’s Tristan und Isolde), there is little in his approach that would seem naturally suited to comedy. His new production of Prokofiev’s high-spirited Betrothal in a Monastery – the central opera at this year’s Festtage – certainly did not resemble a comedy in any conventional sense; yet his oddly engaging concept and meticulous handling of the action yielded a delightful staging that broke completely with the text, but captured much of the opera’s comedic essence.

The story, adapted from The Duenna by Richard Brinsley Sheridan, features characters and devices familiar to even the most casual opera-goer: a protective father and a headstrong daughter, a poor but noble suitor, a conniving housekeeper, mistaken identities, ridiculous schemes and multiple marriages. It even takes place in Seville. Mr Tcherniakov, however, had no intention of taking us on a straight run through the plot. Instead, the curtain went up on a multi-purpose room in which a meeting of ‘Opera-Addicts Anonymous’ was just getting underway. The modern, tastefully bland space was as dour and featureless as any hotel conference room; only the rows of plush, upholstered opera-house seating, identical to those in the auditorium of the Staatsoper, suggested something was slightly amiss.

During the orchestral prelude, the participants were introduced: each one had the same first name as the singer portraying them, and each suffered from a different form of opera addiction, detailed in a brief blurb projected onto the back wall. The session was convened by a quackish figure, listed in the programme as the moderator, whose ‘cure’ involved assigning each character to a particular role and forcing them to enact a series of operatic scenarios, essentially a form of live action role-play therapy. The characters took their tasks lightly at first, laughing at their own obviousness, much to the annoyance of the moderator who stormed out mid-way through the first act. Soon the characters realised they were trapped in the room, and their only hope for escape lay in playing their roles to the very end. 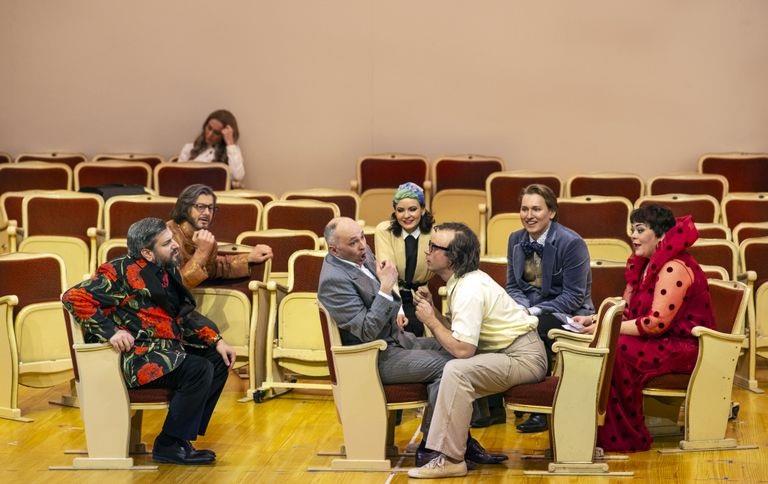 The idea of a small rehab group acting out their neuroses in a confined space could have resulted in three extremely dull hours, but Mr Tcherniakov invested the characters with such personality that their stories came to provide an intriguing foil for the staging’s other fictional layer. From the third act onward, after the characters had been in the room for several hours, they grew more invested in their roles and the boundary between rehab cure and opera plot started to blur. Along the way there were moments of surprising tenderness (Luisa attempting to distract Antonio from his obsession with the former opera star who had taken the role of the Duenna), humour (Don Jerome’s trumpet interlude) and cathartic power (Clara’s meltdown).

The dovetailing of rehab and opera culminated in a joyously anarchic fourth act in which the characters banded together in open revolt, duct-taping the moderator to his chair and breaking into his liquor cabinet. The curtain went down on a scene of drunken revelry midway through the act, suggesting that Mr Tcherniakov had simply decided to cut the final scene. The audience started to applaud and a few people even left to get their coats. But the ending proved to a be a fake, and the curtain rose again on what purported to be Don Jerome’s dream. The magnificent final moments, which continued to build on the irreverent mood of the preceding scene, brought the evening to a close with the reassuring suggestion that no amount of therapy can ever really cure an opera addition. 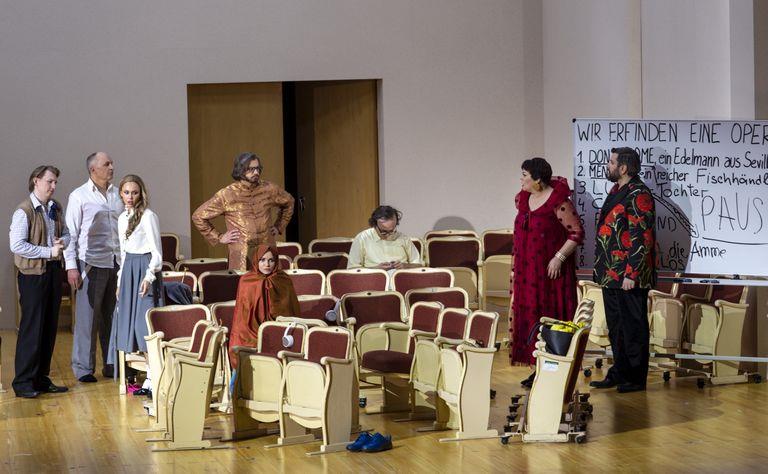 Mr Tcherniakov’s staging was so dependent on character, that it would have been difficult to maintain with anything less than a fully committed cast. Fortunately, the evening’s ensemble contained no weaknesses. Stephan Rügamer’s gently good-natured, quietly charismatic Don Jerome seemed to grow more central as the evening progressed. His opening scenes had a strong comedic sensibility and a lightness of touch – he summoned wonderful faux-rage in his invective against teenaged daughters – but his contributions to the evening’s second half were more substantial. His final monologue with chorus, for which he accompanied himself on tuned metal cups, ended the evening on a note of exuberant delight. Bogdan Volkov’s supple tenor gave Antonio’s first-act serenade a bel-canto warmth, Goran Jurić provided the evening with a sturdy, engaging Mendoza and Lauri Vasar transformed the marginal figure of Don Carlos into a prominent and sympathetic presence within in the action.

It was, however, the trio of female voices that elevated the evening. There was an edge of disaffected sarcasm in Violeta Urmana’s wonderfully realised Duenna – it was most prominent in her second act song – but the mannered fabulousness of her actions and the off-hand extravagance of her delivery served as a natural bridge between the production’s poles of opera and rehab. Aida Garifullina, from her very first appearance mid-way through Antonio’s serenade, established herself as the production’s most appealing vocal presence. Her scenes in the first act were radiant, and her capacity for compellingly wrought lines and subtly powerful projection made each of her appearances a notable highlight. Her strongest competition came from Anna Goryachova, whose darker tone and intensity of delivery resulted in two of the evening’s finest scenes – a forceful, expansive aria in the second act and a profoundly felt lament-turned-breakdown in the third – and made one wish that the role itself was larger. 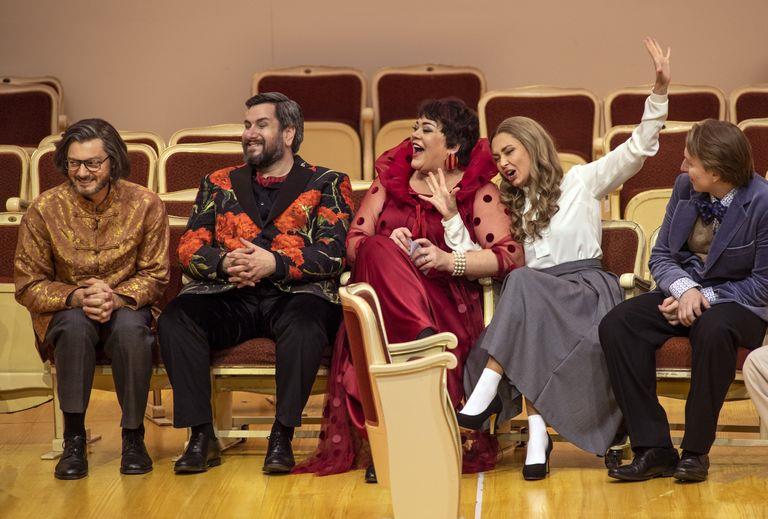 Under the direction of Daniel Barenboim, the Staatskapelle delivered an unhurried performance that made much of the score’s textural nuances. Prokofiev’s ability to build tension with minimal resources was nicely illustrated in the strings and snare accompaniment to Mendoza’s first meeting with the Duenna, and his way of throwing conventional scenes slightly off balance was nowhere more apparent than the opening of the third act, where the vocal beauty of Carlos and Mendoza commenting on the reunion of Antonio and Luisa was set against a vaguely disorienting harmonic backdrop. While the score’s grandest gestures were delivered with appropriate authority, Mr Barenboim devoted equal attention to the fascinating orchestral particularities in its quieter moments.

When Prokofiev was composing Betrothal in a Monastery, the devices and conventions from Sheridan’s original libretto were long out of fashion; yet the work that emerged was neither a throwback nor a parody, but rather an affectionate homage to a mode of comedy which had, a century and a half earlier, become forever entwined with the DNA of opera. If Mr Tcherniakov largely ignored the ‘crazy’ scenarios of Sheridan, his meta-operatic sensibility seemed wholly in keeping with Prokofiev’s own knowing nods to the genre; in stripping away Betrothal’s most conspicuously operatic trappings, the production served as a reminder of how fortunate we are to have opera as a part of our lives.