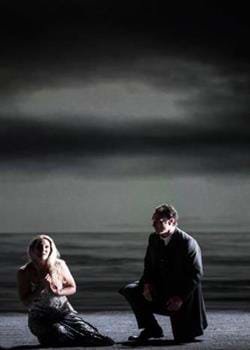 One of the lessons we learn from opera is that relationships between humans and water-spirits rarely end well. Yet the impossibilities that prevented Ondine and Rusalka from experiencing a happy life on land appear only at the edges of Oceane, Detlev Glanert’s newest opera which recently had its première at the Deutsche Oper. If both Hans-Ulrich Treichel’s libretto and Robert Carsen’s monochromatic staging seemed content to excise the mythological in favour of an almost prosaic psychological realism, Mr Glanert’s suitably oceanic score and a pleasingly ambiguous central performance from Maria Bengtsson gave the opera’s finest moments a flavour of the fantastic.

Mr Treichel’s libretto, adapted from Theodor Fontane’s fragment Oceane von Parceval, tells the story of a woman whose reclusive, unorthodox behaviour arouses the suspicion and enmity of her fellow guests at a seaside resort, especially the puritanical Pastor Baltzer. She is pursued by Martin von Dircksen, a wealthy minor noble, but when she eventually (sort of) consents to marry him, the announcement of their engagement provokes the anger of the Pastor and the guests. Faced with hostility and persecution, she disappears from the hotel leaving the disconsolate Dircksen with a cryptic farewell note.

If one hadn’t bothered to read the programme notes, it would have been easy enough to ignore Oceane’s intimate connection with the sea and view the opera simply as an updated variation on nineteenth-century realist tragedy: a woman whose emotional distance has alienated her from acceptance in mainstream society, tries to find a place for herself in an uncaring world but eventually throws herself in the ocean rather than dealing with the crushing banality of ordinary life. It is undoubtedly a subject worthy of Fontane, and perhaps if he had expanded his notes into a full novel he would have found something more profound within the scenario. The libretto, however, could not quite reconcile the drab naturalism of its setting with the mythological undercurrents that might have elevated the story into something more universal.

The opening scenes did not manage to establish the requisite air of mystery surrounding Oceane, nor did they suggest that her awkwardness and eccentricities were rooted in anything greater. She was treated instead as a curiosity, and her existential wrangling often seemed as incomprehensible to us as it did to the hotel guests who viewed her with unease. Nor did the supporting characters offer much in the way of substance, texture or illumination. Kristina, Oceane’s travelling companion, was flattened into a caricature of the bourgeois contentment that Oceane herself would never enjoy. Important questions such as why Oceane had a travelling companion, how they met, or what they talked about in their spare time – questions that might have offered depth to both characters – went unanswered. Her would-be lover, Dircksen, was a man without discernable qualities, and the kindly Madame Luise seemed to be on secondment from an entirely different opera. Only the Pastor offered some promise of ideological conflict – in the opera’s most gripping scene, he turned the hotel guests against Oceane more through the invocation of social norms than religious fervour – yet their battle between rigid conformity and freedom of spirit remained under-developed. 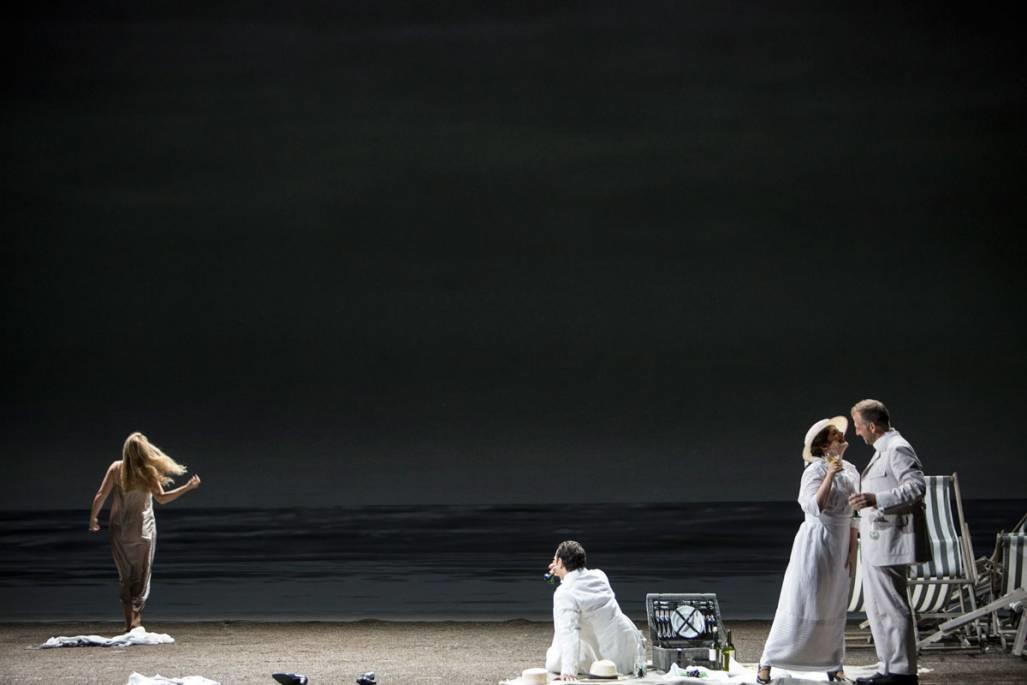 One suspects that director Robert Carsen would have preferred the opera to be a straightforward human tragedy devoid of the supernatural. He seemed most captivated by the idea of Oceane as a social misfit, and the opera’s most engaging scenes – the opening party on the terrace of the hotel, the impromptu funeral for the drowned man, and the engagement announcement – generated their dramatic energy from the friction between Oceane and the chorus of hotel guests. If Mr Carsen’s approach to the more intimate scenes often seemed to highlight the uncertainties in the libretto, his staging was never less than beautiful to look at, a series of monochromatic compositions where the black-clad figures in the foreground were dwarfed by the slate grey of the (video-projected) sea and sky.

The ominous calm of Mr Carsen’s sea-views offered a pleasing contrast with the frequent turbulence of Mr Glanert’s score. While the orchestral prelude used string glissandi, low rumbles and shimmering harps to set the scene, it was the wordless offstage choir who became most closely associated with the volatility of the sea. Their initial appearance seemed to channel the spirit of Ravel’s Daphnis et Chloé, but subsequent appearances had a more volatile character, competing with Oceane in her desperate monologues and, in the penultimate scene, drowning her out entirely. In the busier scenes Mr Glanert favoured a controlled chaos of overlapping dialogue – albeit rarely at the expense of narrative – and, in certain passages, one could sense an ironic temperament in the music. During the banquet of the opening scene, the mundane small-talk of the dialogue was undercut by serious, hyperactive (and sometimes disconcertingly loud) exertions from the orchestra, while the dance scenes with the onstage band seemed laced with a knowing banality. Some of the music tended toward the obvious – Oceane’s first appearance was greeted with harps, modernist shards of high strings and potentially excessive amounts of wind-machine – but Mr Glanert’s ability to disrupt scenes in subtle ways yielded moments of startling dramatic tension. The picnic scene was underpinned by quietly restless strings and tidal surges of brass, while Oceane’s climactic scene was grippingly tempestuous.

As Oceane stood apart from her fellow characters, so did Maria Bengtsson distinguish herself within the ensemble. Her physical embodiment of the title character was constructed from a series of concentrated movements and awkward gestures that, on their own, placed her at a distance from her staid surroundings. Her ‘scandalous’ dance at the end of the second scene was convincingly wild, but it was in the subtle discomfort of her dealings with the other characters that her plight was expressed most clearly. Her physical intensity was matched with a vocal presence that flourished against the unease of the quieter passages, but could also capture the frenzy and passion of her despair. Only in the storm at the end of the third scene did she sound overwhelmed – due more to the unchecked exuberance of the choir and orchestra than to any lack of power on her part – but she rose above the tumult of her final on-stage scene, surrendering eventually the might of the choir, and brought the evening to a close with a haunted (off-stage) delivery of her farewell note. 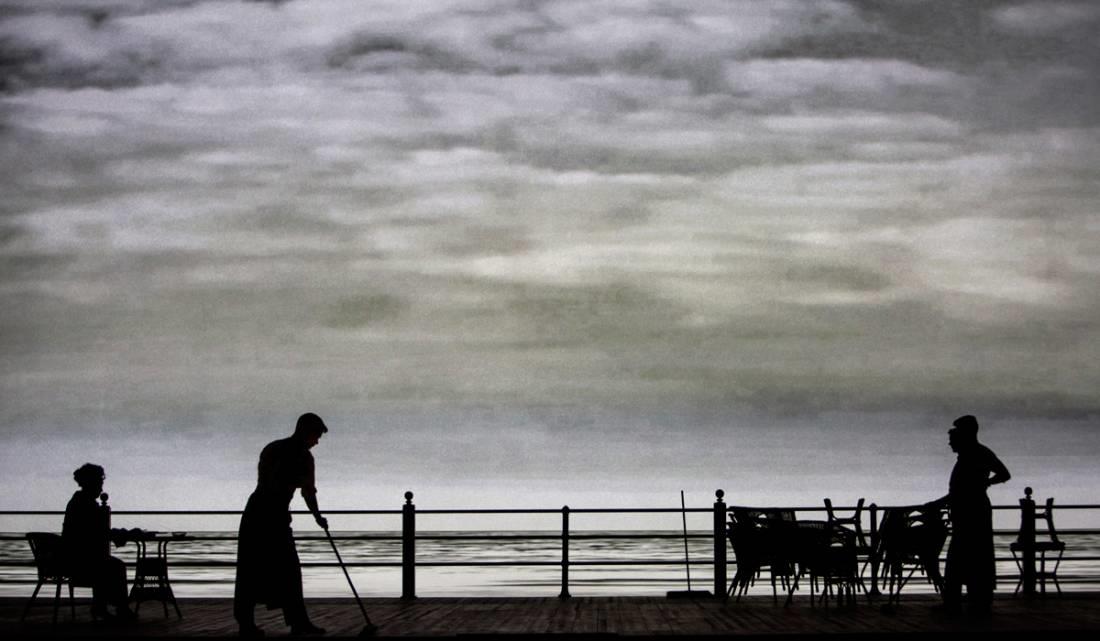 If the remainder of the ensemble were largely relegated to supporting status, there were some delightful performances, most notably from Doris Soffel as Madame Luise, who delivered a soaring monologue at the beginning of Scene Five, but also invested her character with a warmth and compassion otherwise lacking in the production. Nikolai Schukoff’s Dircksen had some nice moments but couldn’t quite overcome the libretto’s indifference to his character, Christoph Pohl was appropriately self-serious as Dircksen’s friend Felgentreu, and as Kristina Nicole Haslett was forced to place an agile, appealingly crisp voice in the service of a gratingly frivolous character. Yet Stephen Bronk was pleasingly fussy in the small role of Georg, and Albert Pesendorfer’s Baltzer was a compelling presence, bringing a dour stuffiness to the impromptu seaside funeral for the dead fisherman but summoning a more focussed contempt when railing against Oceane in the penultimate scene. Under Donald Runnicles, the orchestra delivered a vigorous performance that once or twice threatened to upend the balance of voices and instruments, but otherwise infused Mr Carsen’s carefully composed stage imagery with a welcome tension.

For all that it wished to err on the side of realism, Oceane’s best moments came when it let its guard down and started to channel the mythological traditions to which Fontane’s source text was obliquely indebted. If the opening scenes seemed torn between low-key chamber drama and universal fable, the final sequence of Oceane’s persecution and departure, propelled by the gathering inspiration of Mr Glanert’s score, made a strong case for Oceane’s admission to the pantheon of operatic water-spirits unable to find solace in the terrestrial world.