Our Lady of the Revolving Restaurant 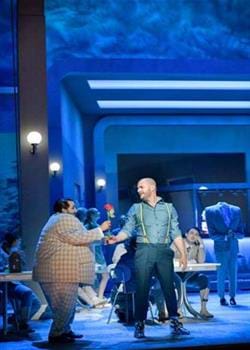 Don Quichotte is, by any definition, a slight work. Written near the very end of Massenet’s life as a commission for the Monte Carlo opera, who wanted a vehicle for Feodor Chaliapin, it lacks both the urgency and melodramatic flair of the works on which Massenet had established his reputation decades earlier. The pedestrian libretto, by Massenet’s longtime collaborator Henri Caïn, comes not from Cervantes, but a stage play by Jacques le Lorrain, who died the night after the play’s Paris première and whose few published writings fell quickly into obscurity. The opera is certainly not without its charms; yet if the demand for substantial leading bass roles has kept it in the repertoire – and a good singing actor can transcend some of the libretto’s self-conscious pathos – the shameless exoticism, overt sentimentality and logistical demands of windmills pose an arguably greater challenge for the director. For the Deutsche Oper’s new production, director Jakop Ahlbom ended up throwing a lot at the story in the hopes that something would stick. The result was something of a mess, but one with moments of arresting imagery among the constant dazzle of stagecraft.

One would be forgiven for thinking Mr Ahlbom had come to opera from a long career providing the entertainment at children’s birthday parties. At times the staging seemed little more than a variety show padded out to opera length, complete with contortionists, acrobats and a disappearing act. It wouldn’t have been surprising if someone had tried to saw Dulcinée in half. There were some magic tricks, but mostly of the novelty shop variety – Don Quichotte’s first act serenade was accompanied by a man producing roses from a red handkerchief – although Dulcinée’s costume change did manage to elicit a minor ripple of surprise from the audience.

The staging was more interesting, and more troubling, in its choice of imagery. The decision to set much of the action in a revolving restaurant where Dulcinée worked as a waitress – set, inexplicably, high in the mountains – seemed logical enough. Yet among the grey suited patrons and greased-up suitors were a few conspicuous figures: a magician in a bulked-up suit many sizes too large, a headless man, and a woman with no hands; there was also a large (walking) disembodied head and two oversized hands, just to maintain parity of body parts. In perhaps the most disturbing scene, equal parts fascinating and gross, a giant sideways face appeared at the back of the stage, and a very large, very long tongue was unfurled from its open mouth. It was clear that the director and props department must have had a tremendous amount of fun with papier maché and foam rubber, but so many of the visual elements seemed disconnected from any larger vision of the story that one was often left wondering why they had bothered. 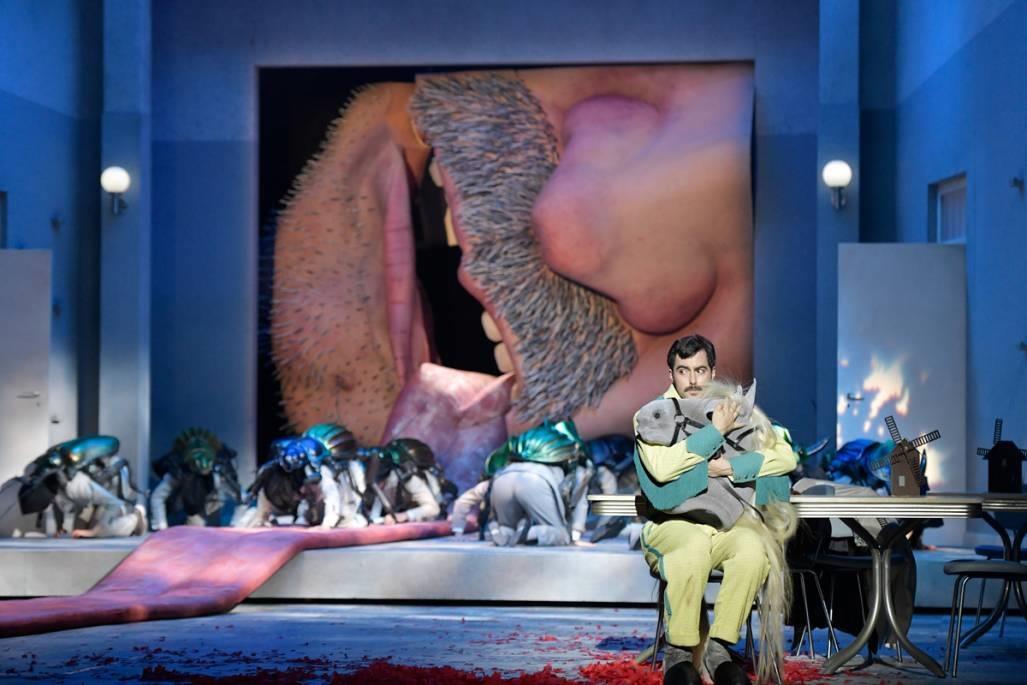 Yet the production was at its most engaging when presiding over its own visual overload. The first three acts, with their near-constant spectacle, breezed by with an effortless geniality. In the second half, when Mr Ahlbom tried to turn the focus toward character drama, or lingered too long on his visual creations in the hopes of turning them into meaningful symbols, the action tended to drag. Beneath the manic whimsicality of the imagery there was nothing to sustain the tragic potential of the rejection scene, or transform Don Quichotte’s death into a moment of transcendence.

The evening’s most satisfying moments came from the strong rapport between Alex Esposito’s Don Quichotte and Seth Carico’s Sancho Panza. The unforced charm of their banter in the second and third acts was far more engaging than any of the visual distractions. In a more traditional production Mr Esposito might have seemed gravely miscast – he was both too young and too energetic to capture the knight’s autumnal decline – but the vigour of his performance and his way with the music yielded wonderful moments. The serenade of the first act matched suavity of line with earnest intent, but the conclusion of the third act was an even greater feat: the conversion of the robbers is arguably the opera’s least convincing moment, but Mr Esposito summoned such towering nobility that it came very close to working. 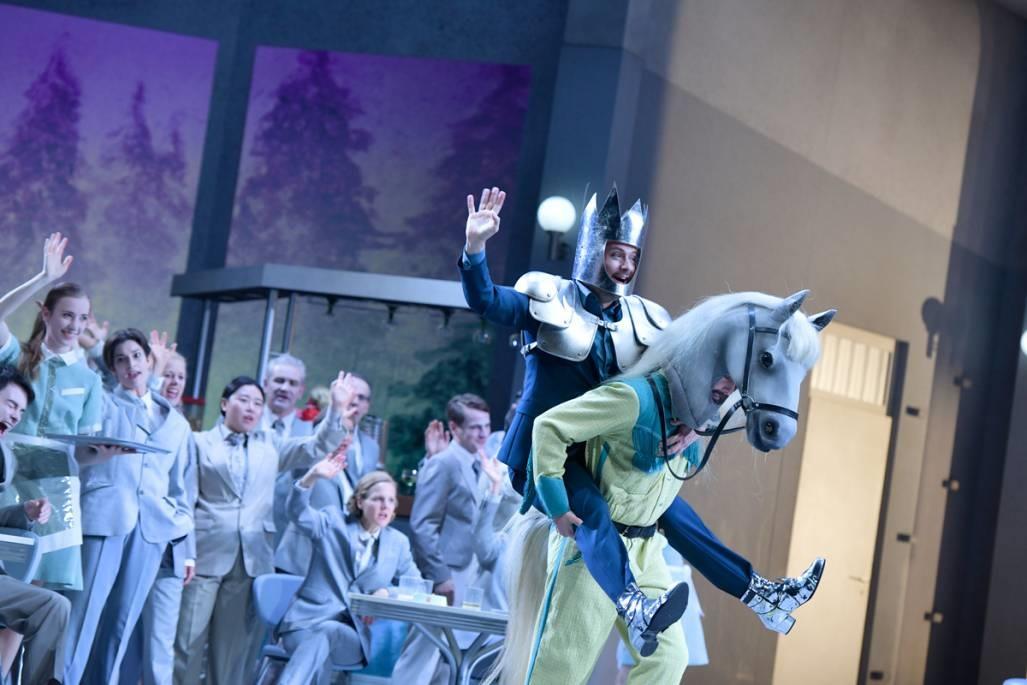 Seth Carico was a delightful Sancho, embracing the manner of a comedy sidekick without going too far over the top. His invective against women in the second act, complete with an amusingly unflattering impression of Dulcinée, and his exaggerated apprehension in the bandit scene made the elegant sincerity of his beautifully-sung defence of Quichotte at the end of Act Four all the more profound. If Dulcinée’s role in the story is more that of a motivating force than a strongly defined character, Clémentine Margaine’s sparkling performance hinted at unexplored depths beneath the coquettish surface. Her aria in the first act was commanding enough to hold its own against the exuberance of the staging, but she was even more impressive in the fourth act, bringing sudden electricity to the stage with ‘Ne pensons qu’au plaisir d’aimer’ and infusing the rejection scene with surprising emotional honesty. 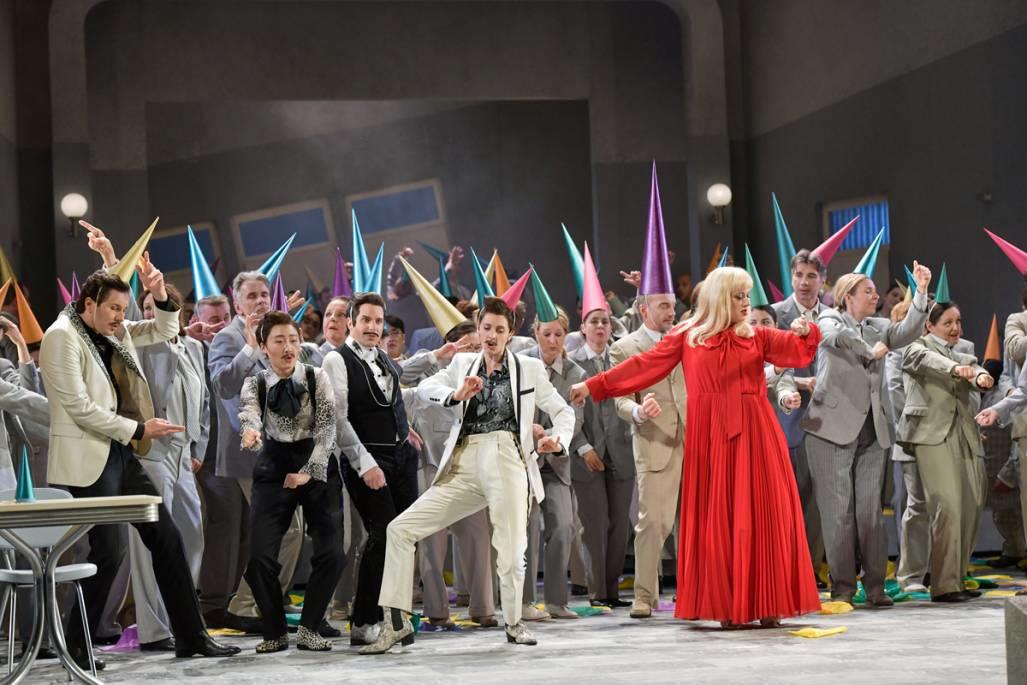 Emmanuel Villaume’s lively, unfussy musical direction brought suitable animation to the first act, while also tempering the incessant castanets of the windmill scene and the obvious exotic flourishes at the opening of the fourth. Yet he was at his best when dealing with the score’s most solemn passages: the third act began as an exercise in mood-setting, but built slowly and patiently into an unexpected expression of transformative grandeur. If such moments hinted at the possibility of a more heroic, and perhaps more deeply tragic opera lurking within Massenet’s score, Mr Ahlbom’s staging kept this Don Quichotte firmly locked in its own world of amiable artificiality. The reliance on comedy, magic and mild surrealism was undeniably diverting, but the use of these modes to sidestep any possibility of emotional involvement seemed a tacit admission that the production didn’t quite know what to do with such an oddly crafted story.