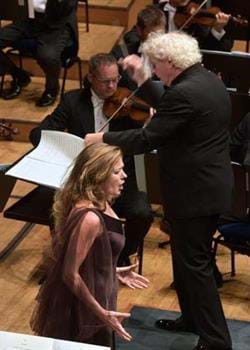 Sir Simon Rattle can still draw a crowd in Berlin. Although he has returned for a handful of guest appearances since leaving his post with the Berlin Philharmonic, his most recent visit came as part of a tour by the London Symphony Orchestra with whom he now serves as music director. The concert, given as part of this year’s Musikfest, featured Hans Abrahamsen’s let me tell you, a work which has become remarkably popular in the six years since its première, followed by Messiaen’s final orchestral masterpiece Éclairs sur l’Au-delà…; however the lack of empty seats in the Philharmonie was perhaps less a testament to the choice of repertoire than to Sir Simon’s enduring popularity with the Berlin audience.

let me tell you, a three-part piece for soprano and orchestra based on the novel by Paul Griffiths, had its first performance in Berlin in 2013 with Andris Nelsons conducting and Barbara Hannigan, for whom the work was written, singing the vocal part. Ms Hannigan has since taken the work around the world – usually to great acclaim – and was on hand for the evening’s performance. She was, as always, an intensely charismatic presence on the stage and her vocal delivery, despite its elliptical tranquillity and inward focus, was very much at the centre of the piece.

In addition to magnificent tone and a complete immersion in the dramatic nuances of whatever text she happens to be singing, Ms Hannigan possesses an extraordinary dynamic control that, on this evening, allowed her to craft phrases which started at the same level as the orchestra, then rose gradually, almost imperceptibly above it. One was left with the sense of the vocal lines emerging organically, as a natural consequence of what the orchestra was playing, and this sensation imparted a precarious quality to the already fragmentary text. Whenever Ms Hannigan was called upon to push the words out of the dreamy haze of the music into a position of greater clarity, the notes that emerged were forceful and pure; but it was her ability to let the words rise and fall above the sonic water-line of the orchestra that created the impression of a fated narrator flickering in and out of existence.

Mr Abrahamsen’s score seemed more concerned with undercurrents and suggestions than explicit events, and the large orchestra was employed in a sparing, concentrated fashion. Sir Simon devoted his attention to sustaining languid, ambiguous moods, finding echoes of late Sibelius in the tidal exchanges of high strings, and hinting constantly at the darker swells beneath the uneasy surfaces. The woodwinds and mallet percussion created moments of glimmering brilliance in the second part, and the final section with its loping pulse and descending melodic figure had a gloomy beauty; but even in its most challenging moments let me tell you remained an approachable work that thrived primarily on the strength of Ms Hannigan’s spectral delivery.

Éclairs sur l’Au-delà… was by far the more daring piece. It is not difficult to see why Messiaen’s final completed work for full orchestra has not yet achieved the popularity that the Turangalîla-Symphonie has come to enjoy in recent years. Although scored for a similarly large ensemble – minus the piano and ondes Martenot – it is considerably more disciplined in its deployment of forces, leaving entire sections silent for long periods. It also has a piety and formal rigour that can come across as austere, with Messiaen’s usual preoccupations – the ecstasy of belief in the divine and the rhythmic joys of bird-song – compartmentalised into intense, self-contained expressions. Despite its symphonic scoring, Éclairs is closer in sound, structure and spirit to the later organ works, in which the ideas and approaches from his earlier pieces are simplified and purified until they achieve their own prismatic grace; and as with the organ works, Éclairs demands both an openness on the part of the listener and an absolute conviction on the part of the performer.

The very first section wastes no time putting that conviction to the test. Messiaen may have been prone to passages of great complexity, but his simplest utterances often pose the greatest challenges to interpreters, and the opening of Éclairs features little more than a series of monolithic chordal phrases from the brass and woodwinds. It demands firmity of vision from the conductor and collective incisiveness on the part of the musicians, neither of which seemed much in evidence. The high woodwinds had a touch of harshness, the brass, although forceful, lacked a chiselled edge, and the mighty pauses between figures were more studied than organic. The following three sections, in which Messiaen’s fascination with bird-song came to the fore, were marked by some excellent playing from the cellos, violins and percussionists, but one was left only with the sense of brilliant episodes disconnected from a larger structure.

The fifth section, however, was a turning point in the performance. Scored for only violins, violas and a handful of cellos, the section came closest to achieving the enraptured state that Messiaen sought to capture. The pace was meticulous yet graceful, the breaths between phrases were charged with solemnity, the dynamic shifts were finely rendered, and the players themselves achieved a concentrated sound of tremendous beauty. From there the performance seemed to gain its footing. The following section, with its dark trombones and stark percussion had an apocalyptic foreboding underscored by an energy previously lacking.

After another interlude in which the expanded flute section conjured a profusion of bird-song, the contrabassoons and double basses introduced the eighth section, in which the different instrumental groups were finally permitted to merge into a full orchestra. If the previous sections had explored specific ideas in an intentionally restricted manner, the eighth had a more overtly symphonic structure, with contrasting ideas and off-kilter rhythms building to a vigorous conclusion. The strings, who had played with such encompassing softness only a few sections earlier, adopted a more aggressive tone and the percussionists were at their best and busiest adding metallophones and bells to the bracing unrest.

There was a brief pause, while members of the woodwind section dispersed into the auditorium for an antiphonal onslaught of conflicting bird-song that made the earlier bird movements sound fairly tame. The brief but chaotic tenth section saw a return of the high harshness in the massed woodwinds, but was propelled by a palpable rhythmic energy. Yet it was the strings who brought the evening to a close, playing with the rapt concentration they displayed in the fifth section but retaining some of the edge that had given the eighth section its elemental power. Despite its unsteady beginnings, the performance was ultimately able to capture some of the tenderness and monumentality that can make Messiaen’s world so intoxicating.