Musikfest 4: A Meeting of Equals 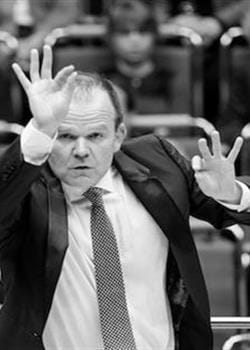 In his various appearances at Musikfest, François-Xavier Roth has distinguished himself as a master constructor of concert programmes, mixing works of different centuries, nationalities and styles with uncommon ingenuity. He has also proved himself a champion of modern music, pairing works by living composers with pieces from the standard repertoire in a way that enriches our understanding of both. For his most recent appearance – with Les Siècles, the Paris-based period instrument group of which he was a founder – the intellectual rigour of the programme was matched by an unconcealed joy in the performances that made this one of the most engaging concerts at this year’s Musikfest.

The central theme of this Musikfest was Hector Berlioz and European Modernism, and the evening’s programme delivered precisely that: the dances from Rameau’s Les Indes Galantes with their reliance on unconventional percussion and expressive dynamics sounded no less ahead of their time than the extraordinary feats of technique demanded by Lachenmann’s Mouvement, which rounded out the first half. At the mid-point of those two extremes was Berlioz’s Harold en Italie, a work of subtle invention and progressive orchestration performed on this evening with exceptional verve.

Les Siècles have the distinction of being a period instrument orchestra who are not attached to a specific period, and in addition to bringing with them a selection of instruments from 1750, 1850 and 1980, they also adjusted the standard tuning for each work so that at no point in the evening was A 440 hz. While the orchestra took great pains to create an authentic sound there was nothing pedantic or contrived about their performance of orchestral pieces from Rameau’s Les Indes Galantes. Mr Roth came on stage and, before the applause had even died down, he had launched the percussionists into an excited processional rhythm on the drum and tambourine. If the harpsichord, theorbo and compact (but satisfyingly rich) string section placed the music squarely in the first half of the eighteenth century, the presence of such prominent percussion gave the pieces an unexpected drive.

The members of Les Siècles played the Rameau pieces standing and their enthusiasm for the music was obvious in the energy of their performances. The two pairs of dances that followed the introductory march were notable for their stirring optimism: the strings imparted an enveloping warmth to the two rigaudons, while the two tambourins, propelled by the subtle pulse of the basses, generated an anticipatory excitement. The ‘Danse du grand calumet’ was the most hypnotic of all; if the percussive flourishes may have seemed something of a novelty to the Parisian audience of Rameau’s day, the unsubtle treatment of rhythm gave the pieces an appealing immediacy. The exotic percussion was absent from the final chaconne, but the trumpets and drums nonetheless brought the suite to a triumphant close.

There was a brief pause for the musicians to swap their eighteenth century instruments for 1980s equivalents, and the small ensemble that returned to the stage – five strings, four woodwinds, two trumpets and three percussionists – addressed the challenges of Lachenmann’s Mouvement (– vor der Erstarrung). The first section seemed to be based on the simple enquiry of how much sound an instrument could make without playing an identifiable note. The cellos ran their bows vertically up and down the strings while the woodwinds sent pronounced hisses of air into the auditorium. When the notes did arrive they formed the kind of seemingly disjointed fragments that one might expect from Lachenmann, but the boundary between conventional playing and extended technique remained pleasingly permeable for the duration of the piece.

From Lachenmann’s demands there arose an unconscious theatricality; while the musicians did not overstate the effort necessary to perform the piece as written – although the synchronised movement of the percussionists during the busiest sections had its own balletic grace – the experience of seeing how the sounds were made was as essential to the performance as the sounds themselves. Yet Mr Roth never allowed the piece ot devolve into mere technical display. His sense of the work’s dynamic ebb and flow yielded thrilling moments, but just as often served to highlight the formal structure that gave the episodes their shape. What emerged was as dazzling for its aural appeal as for its restless explorations.

Harold en Italie, which formed the second half of the programme, was in some ways the evening’s most conventional work. Although the orchestra’s insistence on period instruments resulted in the welcome appearance of an ophicleide, the ensemble on stage resembled the standard symphony orchestra that one would expect to find in a concert hall. The performance, however, was no less revelatory than the two preceeding pieces. If none of Mr Roth’s previous visits to Berlin have suggested a conductor with any special affinity for the romantic classics, there was not a trace of mannerism or indifference to be found in his sprightly direction; with an abundance of enthusiasm and a clear affection for the score, he maintained a firm grasp on the essential character of each movement without diminishing the flights of imagination that make Berlioz’s orchestral works so distinctive.

There was much to enjoy in the performance, not least Tabea Zimmermann’s warm viola tone and Mr Roth’s rhythmic sensibility. Yet its greatest, most surprising strength was the brass section. Whether it was the particular nature of the nineteenth century instruments – in addition to the ophicleide there appeared to be some natural horns and trumpets on the stage – or the discipline of the players, when the brass section came together they produced a sound that managed to be crisp and forceful but never so loud as to dominate the strings. Their lightness and agility was far removed from the burnished, bottom-heavy brass section of the post-Wagner orchestra and none the worse for it. They added untold excitement to the end of the first movement and the wild revelry of the finale – as well as the Hungarian March from La damnation de Faust, played as an encore – and at the end of the evening one was left with a strong desire to hear them flex their muscles in the final two movements of the Symphonie Fantastique.

It was, however, a performance with very few weaknesses. If the two outer movements were the most obviously exciting, there was much to enjoy in the amiably-paced march of the pilgrims – which worked its way slowly toward silence, guided by Ms Zimmermann’s entrancing broken chords – and the gently propulsive Serenade. The final movement brought the concert to a bracing conclusion and the march from Faust was a pleasant addition, but when the evening was over, one was left with the sense of a perfectly balanced programme in which no one piece had overshadowed the others. Mr Roth and Les Siècles managed the rare feat of treating the baroque, the romantic and the modern with equal committment while communicating an infectious enthusiasm for the evening’s diverse trio of pieces.