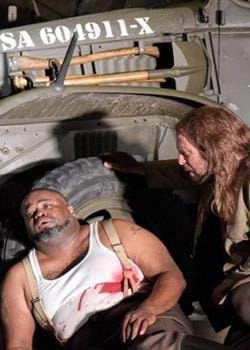 After two decades at Berlin’s Volksbühne, theatre director Frank Castorf made the transition into international opera notoriety in 2013 with his polarising Bayreuth production of Wagner’s Ring. His debut production for the Deutsche Oper Berlin, a season-opening staging of La Forza del Destino, may not have been quite as controversial, but it remained consistently provocative in the best sense of that word. If it did not work especially well as a staged drama – the emotional heavy lifting was entrusted almost entirely to Verdi’s score – its caustic intelligence and consummate skill made for a wholly compelling work of theatre.

The melodrama of love and revenge in the opera unfolds against the War of Austrian Succession in the 1740s, but for this staging the action was updated to the time of the Spanish civil war for the first two acts, and Italy during the Allied liberation for the second two. Yet Mr. Castorf’s primary interest appeared to be in the new-world origins of Don Alvaro; in highlighting them, he transformed Don Carlo’s obsession with purity into a disturbingly overt racism. Yet the colonialist atrocities implicit in the central character – and later made explicit in a speech by the Father Superior about the slaughter of the natives – also forced us to reconsider the American presence in liberated Italy as a twisted extension of the same colonial impulses. The highly anachronistic Coke machine in the army hospital set of the third act offered a less-than-subtle suggestion of the capitalist plague that the new world would soon bring to the old.

While Mr. Castorf remained faithful to the score, he used the breaks between acts and scenes for his own textual additions. There were two extra speeches added to the first half, including one delivered by the recently wounded Marquis between the first and second acts; but the most disruptive additions were reserved for the evening’s final stretch. At the end of the third act, the ‘Indio’, a non-singing but very prominent role devised by Mr. Castorf, appeared on stage to harangue the audience with a shouted passage from Heiner Müller’s Der Auftrag; when he returned moments later to declaim the same passage, with renewed anger and slipping occasionally into Brazilian Portuguese, the audience grew restive. The climactic meeting of Carlo and Alvaro was further delayed by a meticulously performed dialogue from Curzio Malaparte’s La Pelle. (Malaparte’s only film, Il Cristo proibito from 1951, also made an appearance in the staging, with various decontextualized scenes projected during parts of the latter acts). 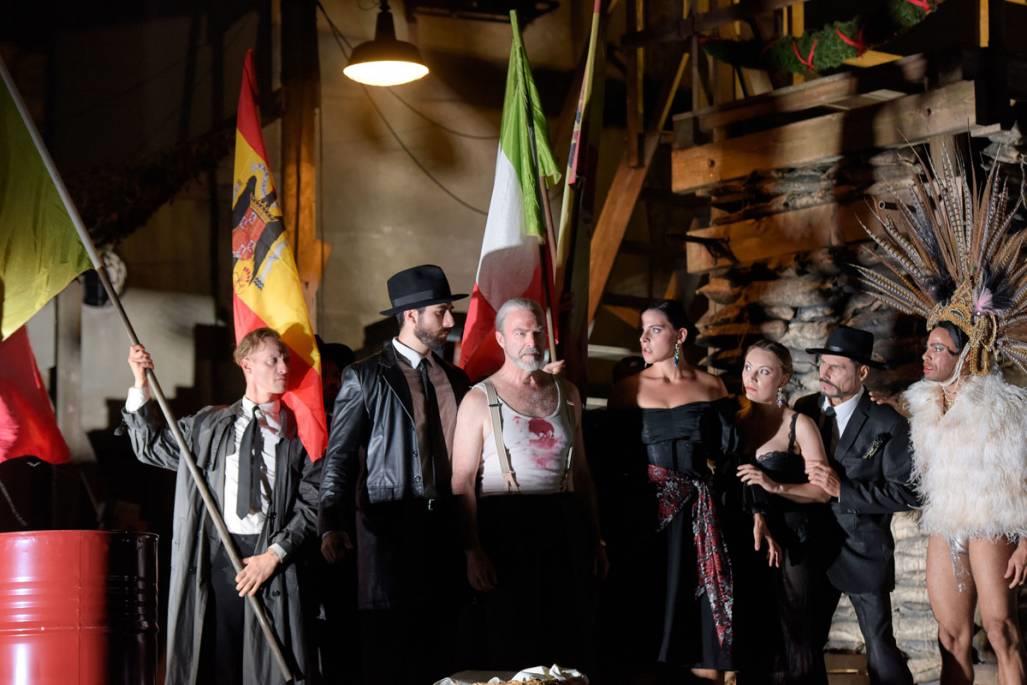 What made the production so consistently interesting (and occasionally frustrating) was neither the complexity of the concept, nor the dense web of interlocking references, nor even the spoken interjections, but rather the way in which Mr. Castorf treated the very idea of staged action. The impressive sets of Aleksandar Denic were built on a large revolving stage, but instead of letting the unused portions of the set go to waste, Mr. Castorf populated them with characters who existed outside of the primary narrative; their actions, largely hidden from view of the audience, were captured by two roving cameramen and broadcast onto a screen lowered from above the stage (intercut occasionally with pre-filmed versions of the same events and scenes from Malaparte’s film).

While Preziosilla was leading the ‘Viva la guerra’ chorus in the second act, the screen featured an unrelated sub-plot involving a pair of thugs intimidating the townspeople and a mysterious figure distributing tins of ham to the needy. During Leonora’s preparations for the ascetic life, a choir of immobile monks stood at the front of the stage while, behind the church facade, the Indio flagellated himself with flowers, convulsed in ecstasy and hung himself from a cross-beam in a very literal imitation of Christ. The frenetic movement on the screen initially undercut the static assembly who were nominally the focus of the scene, but it soon grew strangely hypnotic. 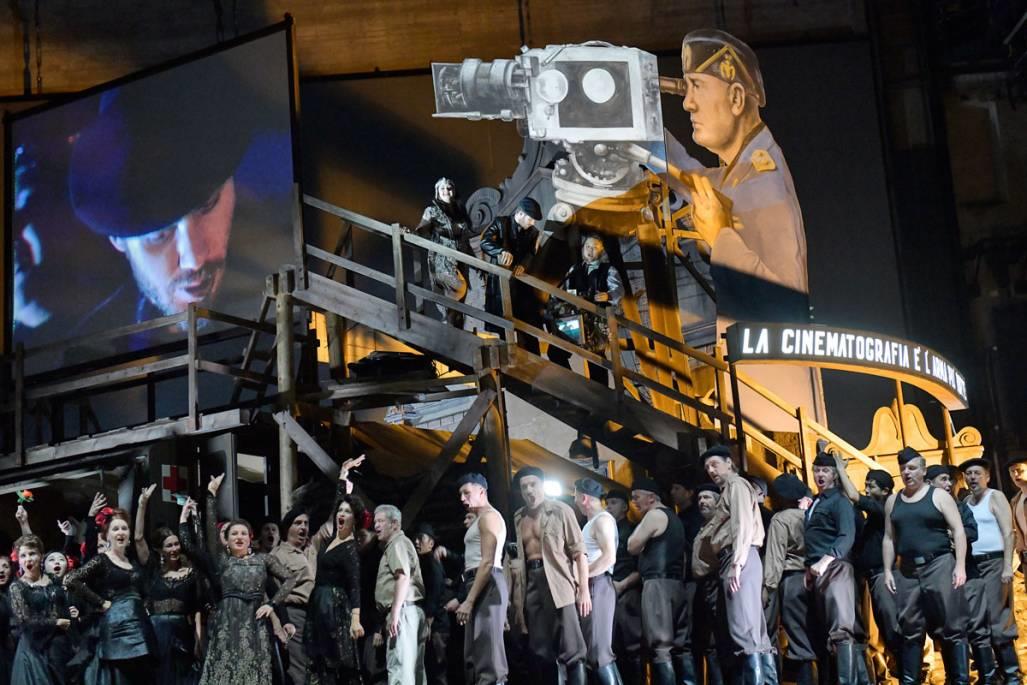 It would be easy to accuse Mr. Castorf of neglecting the characters and actions that drive the opera. Many of the more conventionally staged scenes had an undeniable flatness, and in those moments when the projected visuals from backstage grew tedious – as they did in the first scene of the third act – there was rarely enough going on at the front of the stage to fill the void. Yet the points at which conventional staging splintered into overlapping, disconnected fragments of action, image and reference could not be attributed to directorial indulgence; they were indeed the very soul of the production.

With so much going on on stage, it required a certain force of will to remain focussed on the performances, most of which were very good. Maria José Siri’s Leonora had a strong opening scene, delivering a crisply etched ‘Me pellerina ed orfana’ with a commandingly large if slightly cool tone. Her scene in the second act was less convincing: while there was little to fault in her technique (barring a slight loss of definition in the very lowest notes) her cries of ‘Pietà, Pietà’ summoned little in the way of credible anguish. We can only guess what Verdi and Piave were thinking when they decided to shelve the leading soprano for the next act and a half, but it worked to Ms Siri’s advantage; she emerged fresh and strong for ‘Pace, pace, mio Dio’ perhaps the finest vocal moment of the evening.

As Don Alvaro, Russell Thomas was quite good in the first act but grew considerably better in the evening’s second half. There was nothing out of place in his ardent phrasing during the first act duet with Leonora, but some of the higher notes lost their fullness of tone and there were moments when it sounded as though the exertion was pushing him to a point of discomfort. By the third act he was fully warmed up and his delivery became more natural and more engaging; ‘O tu che in seno agli angeli’ was a moment of beauty, and deservedly won him the most fulsome applause of the evening, but even better were his heated duets with Carlo which pushed Alvaro’s wracked conscience to the very centre of the action. 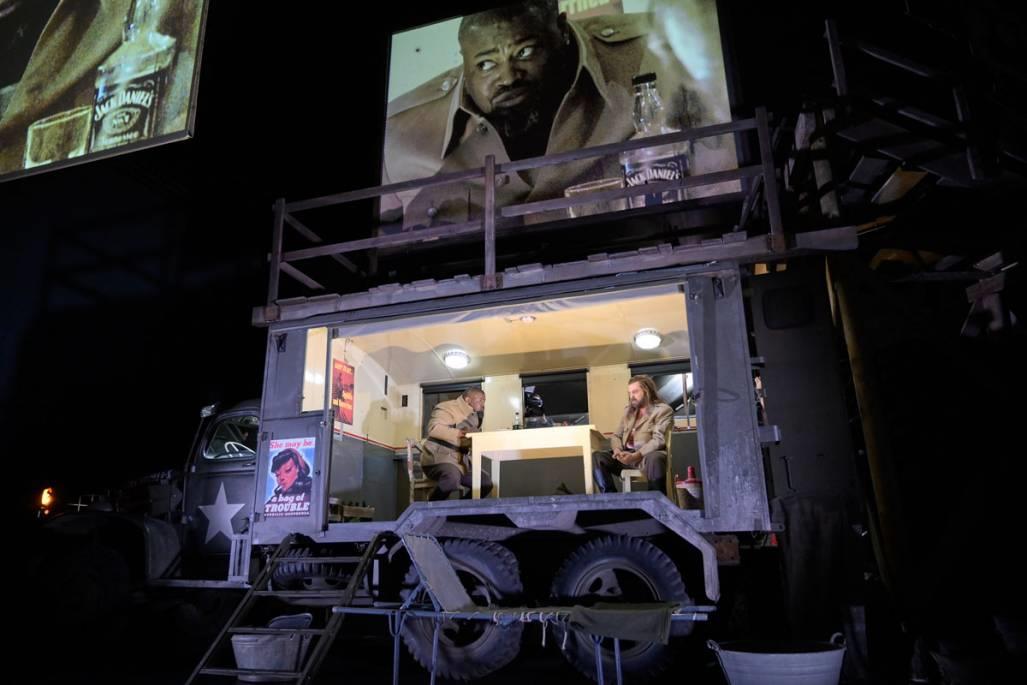 Markus Brück, with characteristic modesty, turned Don Carlo into a quietly compelling study of hatred and belligerence. His introductory scene occurred in the midst of such stage chaos that one had to pay close attention to enjoy the subtleties in his narration, and in the final two scenes he was forced to spend much of his time chain-smoking what appeared to be real cigarettes – surely not the ideal circumstances for a vocal performance – while video cameras got in his face, projecting his every scowl onto the screen. Yet he seemed largely untroubled by the demands of the production, delivering a quietly malevolent ‘Urna fatale del mio destino’ and spitting venom at the object of his hatred in a series of increasingly compelling duets with Alvaro.

In the smaller roles, Marko Mimica’s elegant bass gave weight and focus to the final scene of Act 2, and Judit Kutasi’s Preziosilla presided over two of the opera’s most boisterous scenes with notable verve. Conductor Jordi Bernàcer drew little attention to himself but guided the orchestra through an uncommonly fine performance. If there were a handful of passages where one was struck by the beauty of the playing – the quiet strings in the prelude, or the hushed reverence during Leonora’s final aria – Mr Bernàcer’s great strength was finding the right pace for each scene, allowing the acts to flow with a maximum of flexibility and minimum of idiosyncrasy. In a production that courted visual and conceptual overload, Mr. Bernàcer’s reading was all the more satisfying for its firm, understated command.

The tools of provocation are a crucial part of Mr. Castorf’s playbook, and there were certainly aspects of his production that might have caused discomfort. Yet there was very little in his action or imagery that seemed designed to offend for the sake of being offensive. Indeed the production’s most troubling ideas – colonialism, racism, and wartime atrocities – are matters of historical record, and having them presented on stage merely underlined the larger forces of human nature suggested in the libretto. Mr. Castorf may not ultimately have needed the narrative frame of La Forza del Destino to put forth his arguments, yet his arguments were that much stronger for remaining firmly rooted in the subtexts of the opera.