Dudamel at the Barbican (II): a rendez-vous with Herbie Hancock 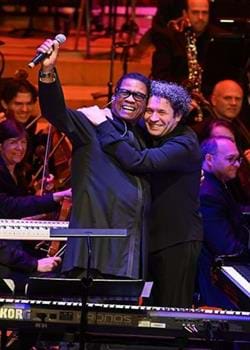 Hancock and Dudamel © 2019 by Mark Allan/Barbican

The memorable second night of the Los Angeles Philharmonic’s three-day residency at the Barbican did not just surpass any putative expectations, it transcended them. Coinciding with its Borders and Boundaries season, the Barbican’s celebration of the 30th anniversary of the fall of the Berlin Wall, this was fittingly a concert without limits: an unconventional and exciting pairing of this sublime orchestra, under the baton of Gustavo Dudamel, with jazz legend Herbie Hancock and his quartet.

The orchestra opened the concert on its own; Dudamel made a few introductory comments, a rare occurrence in the more formal atmosphere of traditional orchestral concerts. This first half consisted of the European premieres of two challenging and engaging works by two Latin American composers. Paul Desenne’s Guasamacabra began with a swirling vortex of quirky lopsided dance rhythms, fragmented snatches of melody, and replete with brass and percussion flourishes. Evocative of a traditional Venezuelan folk genre, the guasa, this darkly humorous maelstrom slowed into a middle section of glassy sustained strings, then sped up again to an anxious, faster, churning dance and cathartic ending. Next came Mexican composer Gabriela Ortiz’ offering: Téenek - Invenciones de Territorio. Also distinctly Latin-American in content and character, it opened with a driving theme, alternating high and lowpitched stabs across the ensemble. This texture then filled out with clarinets and string on sustained chords, before the strings moved into a frenetic whirling. And so the piece continued, juxtaposing and subsequently blending or transforming a series of dissimilar musical ideas. At one point, a folkdance theme emerged, reminiscent of cumbia or danzón. Later came a haunting melody on English horn, then oboe with string accompaniment before a spiky theme passed round the orchestra brought the piece to a driving pulsing climax.

In different ways, both pieces recontextualised vernacular Latin American music in modern symphonic setting, using the orchestra to explore new colours and sonorities. And in spite of the considerable challenges of interpreting complex new works and introducing them to unfamiliar audiences, the LA Philharmonic made it all seem effortless with a focussed, energetic performance.

In the second half, the concert shifted gears, as Herbie Hancock and his quartet joined the orchestra, with Lionel Loueke on electric guitar, James Genus on electric bass, and Justin Tyson on drums. A youthful 79-year-old, Hancock himself played grand piano, Korg keyboard synthesiser and the ‘keytar’ (a synthesiser keyboard worn with a strap like a guitar), often switching instruments multiple times within each piece. Alluding to their previous collaboration at the Hollywood Bowl, Hancock enthused about working with the orchestra, now that they were on the road together. Thus, the LA Philharmonic effectively became another member of his band as the group performed three classic Hancock compositions. They began the set with the funk standard Chameleon, its classic bassline taken up by the orchestra. The orchestra also offered rhythmic interjections between improvised solos from Loueke and Hancock. Next came Butterfly, which, like the opener, dates from Hancock’s early 1970s Headhunters band. With a slow groove, its rich harmonies and lush chordal shifts were beautifully rendered by the strings, contrasted with pizzicato answering phrases. The final piece was Rockit, Hancock’s seminal 1983 Grammy-winning pop classic and hiphop anthem that introduced the technique of scratching turntables to the mainstream. A seminal piece of electronic music, the updated arrangement included DJ Thing on turntables.

The orchestra played an accompanying role again for the effects-laden guitar and keytar solos. The clever orchestrations and arrangements effectively exploited the orchestral potential of the original compositions; from his earliest experiments with new technologies, Hancock’s pioneering electronic music often evoked symphonic textures on synthesisers and sequencers.

The LA Philharmonic performed with the same commitment and intensity as in the first half, realising this rhythmic and funky music with total conviction. Also of note was the palpable affection and respect between Hancock and Dudamel; they seemed like two schoolboys, best friends larking about, belying the seriousness and depth of their respective musicianship.

As the concert moved into its third phase, the orchestra left the stage, and the quartet took over. Earlier on, Hancock had said, “It’s a very human thing, to try something you’ve never done”; that is in effect the mission statement of all artists. “Don’t be afraid,” he continued, inviting the audience to come along on the journey. Opening with a spacey groove, the band freely improvised, alluding to and moving organically through several themes from their repertoire in a kind of ‘smoothie’, as Hancock put it. The band’s consummate artistry was evident throughout, in individual solos and almost telepathic levels of ensemble playing. In a few more numbers, they went through funk and Latin grooves, a quasi-hymnal highlife song, (notable for Loeke’s electronically harmonised vocalisations), a driving version of Actual Proof that featured bassist Genus and drummer Tyson, before closing with Hancock’s jazz classic Cantaloupe Island. A rousing encore brought back Chameleon, in which Hancock got the audience singing two separate riffs simultaneously while he improvised on top, all without uttering a word of direction.

The evening was an experimental and unpredictable journey through surprising places, from exciting new symphonic works, through funky orchestral re-workings of classic Herbie Hancock tunes, to a spontaneous and energetic jazz quartet set that morphed into an exuberant rock concert. A powerful programme, brilliantly conceived and executed by masterful musicians. Bravo to the Barbican for making the bold and ambitious choice to put on a concert without arbitrary boundaries between putative genres: audiences are clearly ready for the experience of pure music.