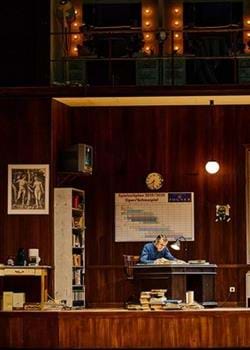 Wagner may have conceived Die Meistersinger von Nürnberg as the vehicle for a very specific argument about the nature of art, yet his libretto is so full of complexities, subtle oppositions, and gloriously imperfect characters that it often seems to transcend its origins from a single authorial hand. This is perhaps the secret to its longevity. It is a work too vast for any single interpretation, and the task of the modern director is less to reconcile its inconsistencies than to construct new arguments from its myriad possibilities. Yet director Jens-Daniel Herzog, whose new production opened recently at Dresden’s Semperoper, did not seem especially interested in arguments. His willingness to unearth interesting themes only to leave them unexplored resulted in a staging with a lot of wonderful set-up and a frustrating lack of follow-through. Although the evening could boast tremendous orchestral playing and a remarkable cast – including arguably one of the best Beckmessers of the past decade – the staging left one too many of its propositions unresolved.

The curtain came up on a familiar scene of sixteenth century burghers praying in a gothic church; but in front of this were rows of theatre seats occupied by people in modern dress, and after the hymn had ended a group of black-clad stage hands began to dismantle the set. It became apparent that the story was going to unfold within the world of the theatre itself, Pogner’s theatre specifically, in which the apprentices were set technicians, David was a stage manager, and the cast and crew laboured under the benevolent guidance of director Hans Sachs. It was Meistersinger re-imagined as a quasi-existential chamber drama, and the claustrophobic microcosm of the back-stage setting made the irritable bickering of the Masters, David’s clashes with the apprentices, and the caustic exchanges of Sachs and Beckmesser seem all the more essential. Yet beneath the volatile surface of the action was a sense that everyone involved had submitted themselves to this purgatorial existence in the name of something greater. The creation of art, as we know, can be a messy business. 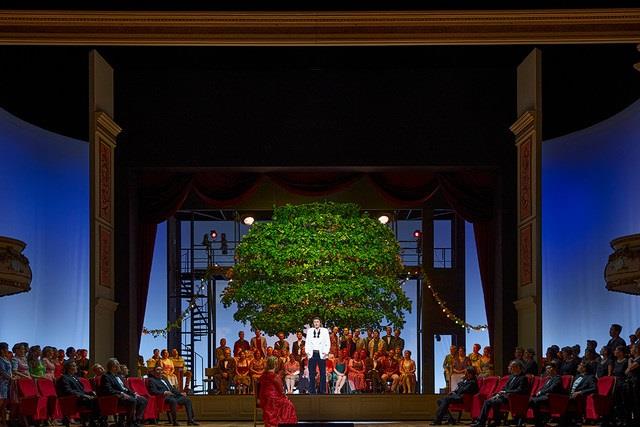 Into this hermetic milieu came Walther, a comically dim individual dressed in the tell-tale black waistcoat and bell-bottoms of a journeyman on his Wanderjahre. His desire to break into the closed world of the theatre put him on a collision course with Eva, who seemed determined to escape its artificiality. Between their developing relationship and the desire of Sachs to fashion the madness around him into a higher art, the staging promised a lively investigation into the complexities of the creative process. Would this be the story of Eva’s pursuit of authenticity or of Walther’s rejection of craft-based artistry? Would it be a commentary on the sacrifices a director must make to realise his vision? Mr. Herzog, having raised these possibilities in the course of his staging, abstained from anything as definite as an argument.

This lack of a clearly defined position, so crucial to the intellectual enjoyment of Meistersinger, was all the more frustrating as Mr. Herzog clearly possessed a sharp observational wit and an ability to fashion crisp, lucid scenes, rich in incidental detail but never lacking in focus. If there was an occasional over-reliance on theatrical arm gestures, there were undoubted flashes of brilliance and some genuinely funny moments, many involving Walther’s utter cluelessness. Mr. Herzog came up with a few unexpected flourishes – perhaps in deference to the reverse logic of the stage, he made the bold choice of placing Magdalene-dressed-as-Eva on the left during Beckmesser’s serenade – but the swirl of unresolved ideas in each scene too often distracted from the emotional essence of the story. The staging itself seemed ambivalent about whether we were supposed to support Sachs’ conciliatory, self-effacing approach to art or applaud Walther’s naiveté; it seemed unsure whether to celebrate or criticise the artifice of its setting. If Sachs’ defence of German art and the response of Walther and Eva brought the opera to an oddly unmoving conclusion it is perhaps because there seemed to be far too little at stake. 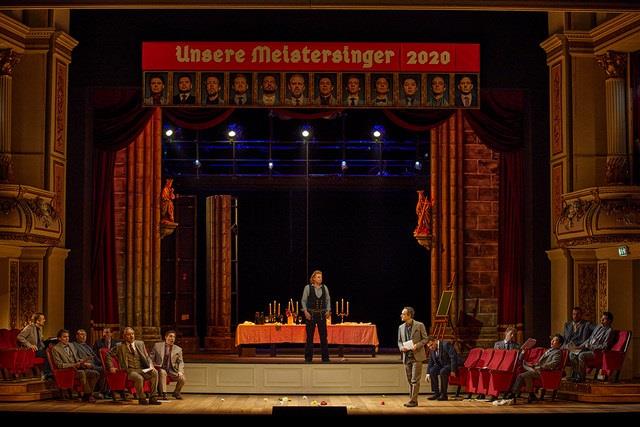 The musical quality of the evening, however, was beyond reproach. There may not have been a single dominant performance among the well-balanced ensemble cast, although Adrian Eröd’s Beckmesser came very close. Mr. Eröd didn’t merely give an excellent performance, he made one realise just how often the role Beckmesser is undervalued. Where many find only comedy or villainy, Mr. Eröd found complexity. In the first act he quietly commanded the meeting of the masters without drawing undue attention to himself, his disdain and self-confidence rendered palpable without the support of over-acting or over-phrasing. Although his appearances in the third act did rely more on nervous mannerisms, Mr. Eröd never defined his antagonism solely in terms of pedantry or delusion; when he levelled his accusations that Sachs was trying to undermine him, one had to wonder if there wasn’t some truth to his statement. It may not have been a perfect performance – a few lines from the prize song were transposed and the second act scene with Sachs didn’t quite achieve a peak of ridiculousness – but it was several levels above the usual Beckmesser.

When Georg Zeppenfeld sang La Roche’s monologue from Capriccio on the same stage several years ago, it required little imagination to hear how his vocal strengths might also be suited to Hans Sachs. But if his dark, occasionally weighty tone gave the character a pleasing authority, the most impressive aspect of his performance was the conversational ease he brought to his dealings with everyone around him. If the Flieder and Wahn monologues didn’t sound especially wracked or troubled – this was, above all, a pragmatist reading of Sachs – the succession of crucial one-on-one scenes with Eva, Walther, and Beckmesser in the second and third acts were marked by lithe affability and a complete lack of affectation. 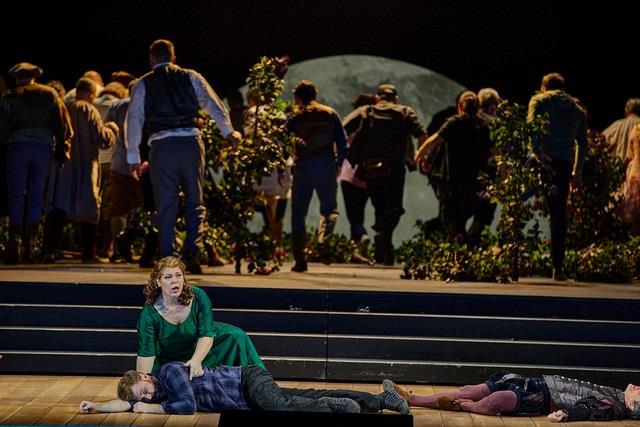 Camilla Nylund’s powerful, forthright Eva was a delight, although at certain moments it seemed possible that her presence was too large for the role. Certainly one never believed for a moment that her fate was tethered to Pogner or the masters. Yet her dramatic sensibilities yielded a disarmingly poignant ‘O Sachs mein Freund’, one of the highlights of the third act. As Walther, Klaus Florian Vogt’s unfailingly elegant line and gently soaring tone were oddly matched to a physical performance which demanded comedic gracelessness. Mr. Vogt is not perhaps as natural a singing actor as Mr. Eröd or Mr. Zeppenfeld, and when delivering Walther’s set-pieces – ‘Am stillen Herd’ or the prize song – he became possessed of a character-breaking nobility. He nonetheless managed to turn a limited repertoire of bewildered and befuddled expressions into a credible and often amusing portrayal of someone who had only the most limited understanding of the complexities swirling around him.

Christa Mayer was a fine Magdalene, even if one had a vague sense that role itself did not make adequate use of her talents. Sebastian Kohlhepp’s David sounded a touch lost in the larger ensembles, but he delivered an excellently conceived enumeration of the tones which seemed to draw its inspiration directly from the orchestra. And Vitalij Kowaljow was a strong Pogner who, like Mr. Zeppenfeld, had a pleasingly natural style. The Johannistag speech was framed more as a practical business matter than a lyrical aria, but it built to considerable heights.

Christian Thielemann rarely leaves any doubt about his absolute control over the music, but where a perfectionist approach can sometimes lead to fussiness or rigidly, his Meistersinger was stately, calm and convivial, relaxed in the most conversational scenes but never slow and certainly never meandering. His talent for dramatic delineation was most apparent in the complex finale of the first act, in which the mounting tensions between Walther, Sachs, and the Masters emerged with absolute clarity, and the climactic brawl of the second, which kept the chaos at bay while maintaining considerable energy. Yet Mr. Thielemann and the Sächsische Staatskapelle were equally attuned to the subtle delights and presiding warmth of the score; even in the operas most understated moments, we were never allowed to forget that we were in the presence of a masterpiece.