Two drifters, off to see the world 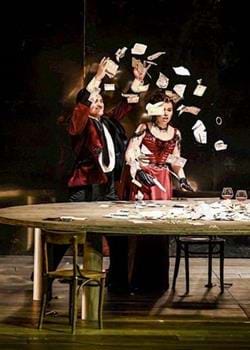 In the third act of Jules Massenet’s Manon, the title character offers an unexpectedly sober assessment of pleasure’s fragility. Mid-way through the gavotte - a movement that crowns Manon as the new beauty of Parisian society - the music shifts to the minor, and Manon remarks that “the most faithful heart forgets love in one day […] youth spreads its wings and it flies away”. In Floris Vitter’s new production for Zürich opera, this was made especially poignant by the sudden, ghostly re-appearance of Des Grieux - a figure from Manon’s recent past who haunts her new life, reminding her of the ephemerality of pleasure. Behind the present surface, there are always pasts and possible futures that shape our every action and desire.

Manon’s insight seemed one starting point for Vitter’s perceptive, visually ingenious and compassionate production. As Vitter suggested, this is an opera in which both main characters are constantly shadowed by dreams of alternative lives they might lead: first with one another, in Paris; then the rural fantasy evoked by Des Grieux in “En fermant les yeux”; next Manon’s dream of high society, followed by Des Grieux’s wish for religious escape; then the dream of financial freedom in the gambling scene, and fantasies of escape from Le Havre; and finally wistful reminiscences of the lives they once had. Manon and Des Grieux are in that sense almost mirror images of one another. While he enjoys more agency in the opera’s stage world, both characters are inveterate dreamers who long for a paradise ever out of reach, one that might resist the decay of time.

Vitter’s production played with this idea in manifold ways. Updating the story to the Third Empire Paris, Act One found Manon trying on another lady’s clothes, in a first trial for a future imagined life of luxury. In the crucial third act, Manon’s haunted existence was matched by Des Grieux’s craving for release in the church, a scene which climaxed with vast screens opening at the back of the stage to reveal a spectral Manon atop the altarpiece (she returned at the end of the duet as a naked Virgin Mary, taunting the bishop). The Act Four gambling scene experimented with slow-motion for the chorus, as we were brought into Grieux’s delirium at Manon’s greed: ordinary, ‘realistic’ stage time was pierced to expose the rushing desperation behind it. 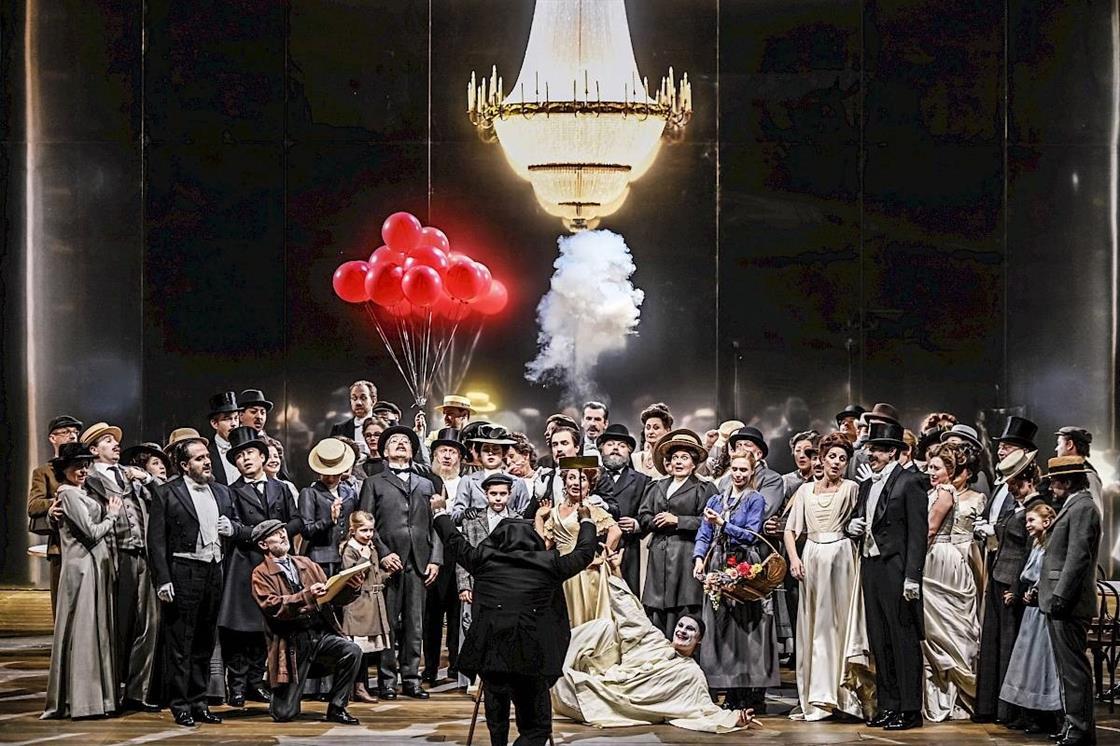 Most memorable was the final scene. It played out on a nearly bare stage, until Manon’s dreams of the past brought back the glittering chandelier from earlier scenes, and the entire cast gathered upstage to watch Manon’s demise. The chorus held up shattered pieces of mirror, as though asking us to recognise ourselves in the broken dreams of Manon’s life. A young girl – first seen in the overture – looked on bewildered, wondering: “is this the life of which I’m dreaming? What other lives are available to me?” 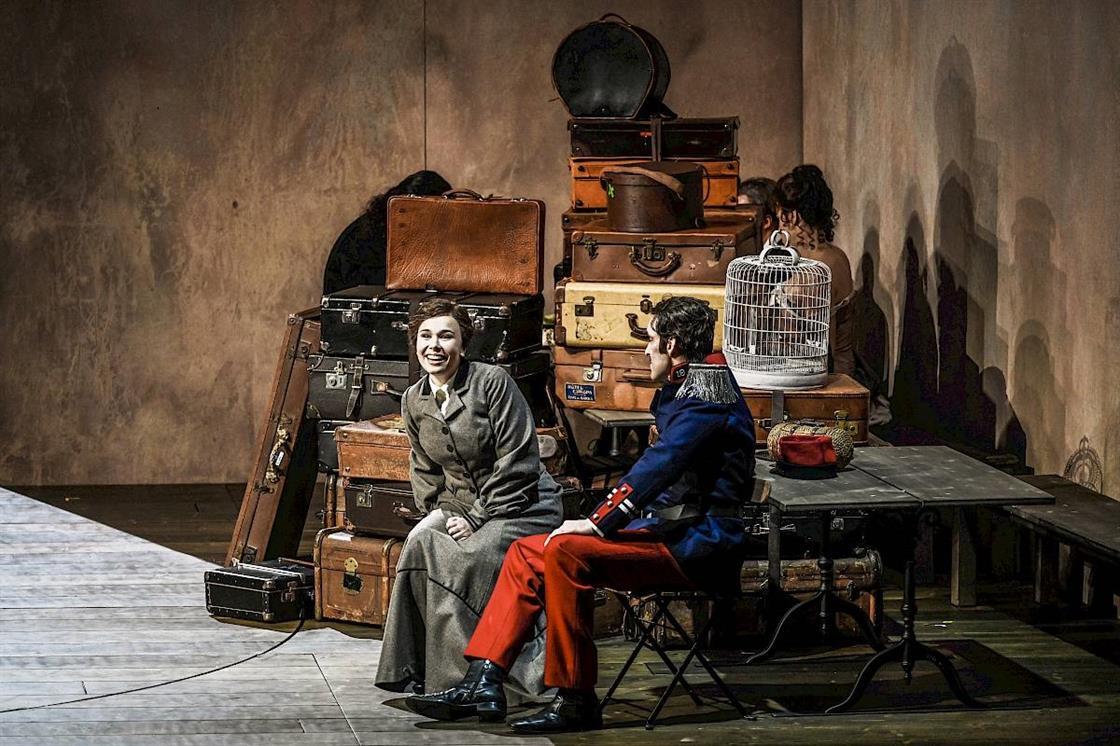 Manon here rightly emerged as a more insightful and sympathetic character than in many other productions. She is vain, yes, but also tender, reflective, innocent, victimised and fantastical. Her frivolity is that of a poet. Vitter’s production was full of telling details, such as the pleading look Manon gave to the crucifix for guidance during the Saint Sulpice duet, and the distance between the two lovers during this passionate exchange. “N’est-ce plus ma main” didn’t find the soprano sexually draped over the tenor, but instead staring away in the distance and stroking her own limbs: exploring the fantasy of touch rather than its lived reality. Des Grieux, too, came across as more vain and worldly than he often does. Dressed in a lush velvet purple jacket for Act Four, he is nearly every bit as dandyish as Manon, but blessed with more options in life. When she dies, where will this man go? Manon knows society has decided her story demands to end. Will Grieux return to the church? Or keep looking for another Manon?

Vitter was aided by superb performances in the main roles. Elsa Dreisig offered a gorgeously sung and richly characterised portrayal of Manon, founded upon impeccable legato and excellent diction. Her voice’s bell-like quality brought a winning innocence, but Dreisig also found a hint of a snarl for Act Four, before offering wonderful shadings in Act Five. Nerves seemed to unsettle the fireworks of the Gavotte, but later acuti were entirely secure and Dreisig resisted the temptation simply to simper or belt. This Manon seduced with her beautifully varied accents; a hugely promising performance from this impressive young singer.

Piotr Beczała is now in his third decade of an international career, but you would hardly guess it to hear him. The voice remains extraordinarily fresh and well controlled, now rather metallic in timbre but with exceptional breath control and a still secure range. “Ah fuyez douce image” was sung with just the right contrast between ethereal fantasy and heroic heft, and in Act Four he found a newly mournful, bitter tone for the couple’s ruin. Beczała has, to be frank, rarely struck me as a particularly varied performer, but this was one of his very finest performances; the audience adored him.

Manon is really a two-person show, but supporting parts were strongly cast throughout. Yuriy Yurchuk offered a mellifluous Lescaut, making the most of “Ne bronchez pas, soyez gentille”, in a dialogue that Vitter parodied as a female equivalent to army life. Alistair Miles was a fine, appropriately mature Comte de Grieux, while the grisettes were excellently delivered by Yuliia Zasimova, Natalia Tanasii, and Deniz Uzun; intonation was bang-on. The ballet in Act Three was brilliantly staged here by Pim Veulings as a Bovary-esque sequence, in which Manon identifies with the story performed and eventually cries out in horror; the many minor roles were well-delivered.

In the pit, Marco Armiliato kept Massenet’s luscious if prolix score light on its feet, with textures well-balanced and excellent coordination between singers and pit. The production’s drive was helped here by only having one interval (in the middle of Act Three), an unusual decision that worked nicely. Orchestra and chorus sounded crisp, and a full house applauded the singers to the roof. On this occasion, there was little incentive to fantasise about alternative worlds: this was about as close to perfection as opera gets.