The Deutsche Oper’s Meyerbeer cycle, which started two years ago with Vasco da Gama (L’Africaine) and continued last November with Les Huguenots, has been a source of great intellectual delight, a chance to become better acquainted with the composer’s oft-neglected oeuvre while reflecting on the legacy of French grand opéra from the vantage point of the twenty-first century. If this description sounds somewhat dry, it is perhaps because the operas themselves have been more interesting than likeable. Both works were undoubtedly important in their day, but their monumental self-seriousness often left one daydreaming of simpler operatic pleasures.
The third instalment, a new production of Le Prophète, was arguably the first in the series to succeed equally as both history lesson and cohesive work of drama. Oliver Py’s staging, although not without its peculiarities, remained admirably focussed throughout, placing well-realised characters within an imaginative vision of the opera’s historic sweep. With a strong ensemble of singers and the consistently inspired musical direction of Enrique Mazzola, Le Prophète was both a bleak fable of failed revolution and the strongest argument yet for Meyerbeer’s unconventional artistry.
It would be easy to attribute some of the success of the evening to the opera itself. Although the partnership of Meyerbeer and librettist Eugène Scribe (working here with occasional collaborator Émile Deschamps) could still result in a perfect storm of obviousness – the harmonic contours of Meyerbeer’s score often seemed to mould themselves obsessively to the narrative and moral signposting of Scribe’s words, adding little in the way of commentary or ambiguity – Le Prophète at least managed to avoid the structural imbalances that plagued Les Huguenots. The story of Le Prophète is far from simple, but it is rooted in recognisable operatic emotions: love, desire, jealousy, revenge and the corrupting influence of power. In maintaining a tight focus on the human elements of the story, director Oliver Py was able to render the transformation of Jean de Leyde from innkeeper to revolutionary prophet both credible and tragic. 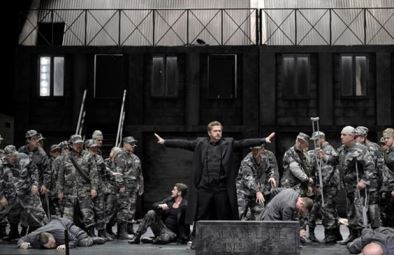 The character drama at the centre of the opera was set within a brilliantly rendered tableau of social upheaval, a monochrome world of concrete tower blocks transformed in the course of the action into war-ravaged ruins; the grey costumes of the downtrodden workers were traded-in for equally grey camouflage fatigues, and the production’s only flashes of colour came from the saturated red and blue of the French flag – unfurled in moments of revolutionary fervour – and the blood-red lining of Oberthal’s black fur coat. There was, perhaps, nothing about the visual character of the production that hasn’t been seen before: regular visitors to the opera will be familiar with bleak evocations of twentieth-century edge-cities complete with garish illuminated signs and realistic automobiles (in the third act, one of the cars was turned over and set on fire, bringing this season’s tally of flaming cars in new Deutsche Oper productions up to two). Everything about the staging seemed to correspond to this decade’s conception of ‘high production value’, but it was all so skilfully executed that one didn’t really mind.
Admittedly, the staging was not without its troubling aspects. Mr Py’s fascination with simulated sexual acts and sexual violence made for a disturbingly graphic conclusion to the first act, but seemed tedious and lazy as the primary visual element in the final act’s coronation feast. There were also moments when Mr Py seemed to take perhaps too much delight in depicting the violent atrocities of life during wartime. Yet the extended ballet of the third act, in which a series of beatings, rapes and tortures played out on repeat against a grim cityscape accelerating gradually on the revolving stage, was among the evening’s most inspired scenes, a carousel of wartime horrors that plucked one of grand opera’s least appealing conventions out of the nineteenth century and made an eloquent case for its possibilities in the twenty-first.
The transformation of Jean de Leyde into the titular prophet provides the opera with its central thread, but it is Berthe and Fidès who give the story its human foundation, and on this evening both characters were given exceptional performances. Elena Tsallagova’s Berthe was one of the evening’s most consistent sources of delight: her opening scene, anticipating her happy marriage to Jean, was quietly exquisite, a charming mixture of delicate phrasing and crystalline high notes. But the effortless beauty of her voice was matched with a keen dramatic versatility. When she appeared in the second act, having escaped abduction by Oberthal, her tone was darker, her delivery more frenzied; by the time of her final appearances in the fourth and fifth acts, there was a steely resolve suggesting a character whose illusions had been damaged irreparably by the course of history. 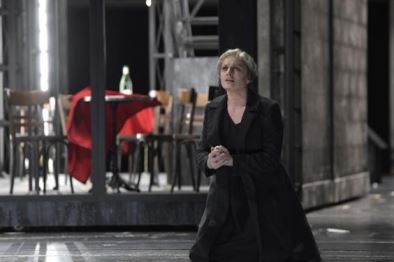 The Fidès of Clémentine Margaine was no less impressive. Although she remained somewhat marginal during the first two acts (and didn’t appear at all in the third), she completely dominated the final two, reacting to the escalations of the tragedy by intensifying her own nobility of spirit. She was nowhere more captivating than in the final scene of the fourth act, absorbing the sting of rejection by her own son with a humility that reduced in stature everything around her. The solo scene at the beginning of the fifth act – the closest Fidès comes to having a conventional vocal showpiece – achieved a similar magnificence through Ms Margaine’s richness of tone; and the two scenes in which Ms Margaine and Ms Tsallagova sang together, one in the first act and another in the fourth, were both high points of the evening.
In the title role, Gregory Kunde was able to suggest a reluctant figure whose inner moral sense and unshakable self-doubt prevented him from assuming fully the role of prophet; his ability to hold on to the remaining strands of his own humanity gave his fourth act rejection of Fidès much of its tragic power, but also made his reversal in the fifth act seem less contrived than it appears in the libretto. Vocally his finest moment was the impassioned speech delivered to the soldiers at the end of the third act, his soaring exclamations anchored by low notes with an almost baritonal warmth. Seth Carico, who sang the charismatic villain Don Pedro in Vasco da Gama two years ago, was equally charismatic and considerably more villainous as Count Oberthal; although his time on stage was limited, he had no trouble establishing himself as the embodiment of an evil that will always prevail. The three Anabaptists were performed with an appropriately dry severity by Derek Welton (Zacharie), Andrew Dickinson (Jonas) and Noel Bouley (Mathisen); of the three it was Mr Welton whose firm, intelligent phrasing offered flashes of independence from the hive-mind. 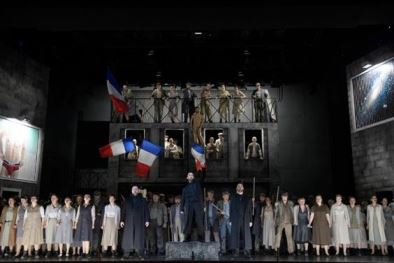 The singing and the staging were both impressive, but it was the musical direction of Enrique Mazzola that held the evening together. In the big numbers Mr Mazzola proved to be a sympathetic accompanist, never allowing the orchestra to eclipse the most ostentatious vocal passages; yet his command of the score – the performance marked the première of the new critical edition – his unlaboured precision, and his ability to carry dramatic momentum from scene to scene gave the evening its dynamic essence. Under his direction, the ballet turned out to be a minor revelation and one of the evening’s most unexpected delights: invigorating, engaging and accessible, it had a lightness of touch that is often absent from Meyerbeer’s prestige-minded vocal writing.
Of the three operas performed thus far as part of the Deutsche Oper’s Meyerbeer cycle, Le Prophète is perhaps the most satisfying to a modern audience simply because it comes closest to our expectations of what a nineteenth century opera should be. Mr Mazzola and Mr Py had the good sense not to obscure its accessibility. With musical performances that located the vitality in the score and a staging that kept its eye on the humanity at the centre of the historical action, the new production of Le Prophète was both an epic slab of grand opera and a compelling piece of musical drama.