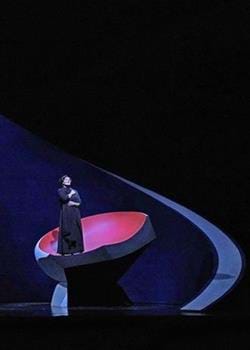 Ariadne auf Naxos is a work of unresolved opposites: in the course of one prologue and one act, Strauss and von Hofmannsthal gave us classical tragedy and backstage intrigue, high art and burlesque spectacle, heroic individualism and collaborative compromise, all while refusing to take sides or pass judgement. The Santa Fe Opera’s new production – the fifth and final opera of their 2018 season – managed to observe the opera’s myriad ambiguities and hold its opposing forces in an almost perfect equilibrium. Between the intelligent staging of Tim Albery and superb musical direction from James Gaffigan, this Ariadne was both an effortless entertainment and a considerable dramatic success.

Admittedly, Mr Albery – who achieved a similar balancing act in his excellent Santa Fe production of Capriccio a few years ago – did not stray too far from the basic ingredients found in the libretto. The prologue, set at some point in the first decades of the twentieth century, unfolded in a shabby basement corridor lined with small dressing rooms and linen closets, all lit by unflattering bare bulbs; the Major Domo, when he appeared, came down a flight of steep, narrow servant’s stairs. It was clear that the richest man in Vienna had spared some expense on at least one part of his house, and the worn, subterranean setting had the effect of equalising the lofty ambitions of the dramatists and the professional pragmatism of the comic players; for all their delusions of importance, they all occupied a similarly low position.

The prologue maintained a lightness of spirit and liveliness of action without losing focus or growing chaotic. Its incidental observations and character quirks were often amusing, but its comedic tendencies were kept rigorously in check. Against the Major Domo’s unreasonable demands, the Music Master’s ceaseless placations and the backstage preparations of the opposing artistes, it was the Composer who emerged as the emotional centre of the drama. Young and still hopelessly idealistic, he spent much of the prologue trying to salvage the integrity of his tragedy while learning his first harsh lessons in the art of selling out; yet his vision of Ariadne’s sorrow was rendered so vividly in the opening scenes that it continued to reverberate throughout the second half. 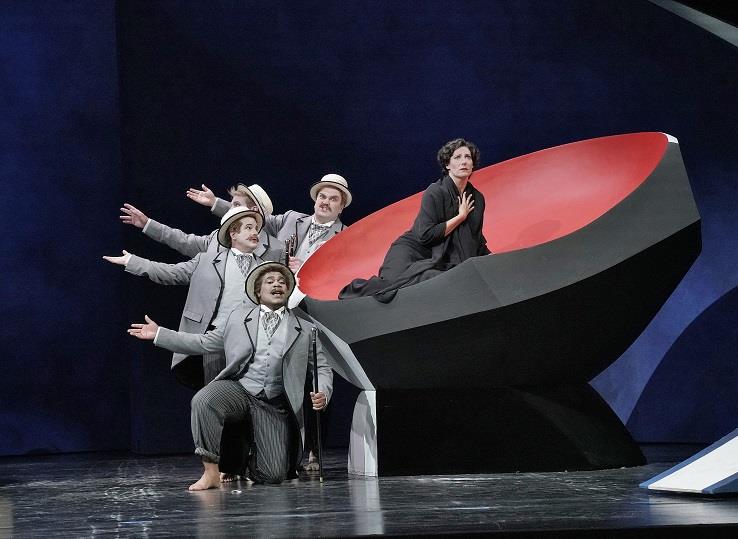 The opera proper occupied a completely different world. The elegant, abstract set – by Tobias Hoheisel – consisted of two gently curved walls framing an elevated, hollowed-out object, halfway between a boulder and a sixties egg-chair, in which Ariadne spent the bulk of her stage time. The simple shapes and bold colours managed to be beautiful in their own right while also suggesting an homage to mid-century Wieland-Wagneresque minimalism. When Zerbinetta and her crew arrived with shipping pallets and an easy chair clearly borrowed from one of the dressing rooms, it was both an assault on the notion of high-end production values and a jarring intrusion of the world of the prologue into the hermetic lamentation of the tragedy.

Indeed, Mr Albery rarely let us forget the prologue, or the ways in which the backstage negotiations affected the opera proper. After the meticulous staging of the Ariadne scenes, the arrival of the comic players seemed genuinely haphazard and improvised; and in Ariadne’s refusal to engage with, or even acknowledge Zerbinetta, one could sense the underlying presence of the Prima Donna, gritting her teeth and waiting for the ‘improvisation’ to end. If Mr Albery’s staging was relatively conservative in its concept – it never tried to do more than the libretto would bear – it did a marvellous job of weaving the opera’s binaries and contrasts into a cohesive whole.

Mr Albery’s most significant departure was the decision to have the prologue (and even some of the opera) sung in English. The translation, prepared by Mr Albery himself, was faithful to the notes and rhythms of the score, but by the end of the prologue one had to wonder why he had bothered; surely von Hofmannsthal’s near-perfect original would have sufficed. However, the opera proper offered some justification: when the comic players started singing in English after Ariadne’s German arias, it intensified the awkwardness of their intrusion and conveyed a sense of just how much they were lowering the tone; we could imagine the composer watching from the wings in horror. Yet when Zerbinetta switched to German for her showpiece aria, it suggested a genuine (if ultimately fruitless) attempt to communicate with the grieving Ariadne.The evening was fortunate to possess an excellent ensemble cast who conveyed the nuance and subtle intelligence of Mr Albery’s staging. In the prologue, Kevin Burdette delivered the Major Domo’s spoken lines with crisp officiousness, and Rod Gilfry’s conciliatory, unflappably professional Music Master suggested a lifetime’s experience of staying one step ahead of disasters; and in the opera proper, the trio of Meryl Dominguez, Samantha Gossard and Sarah Tucker (as Naiad, Dryad and Echo) provided elegant support to Ariadne’s suffering and transfiguration. 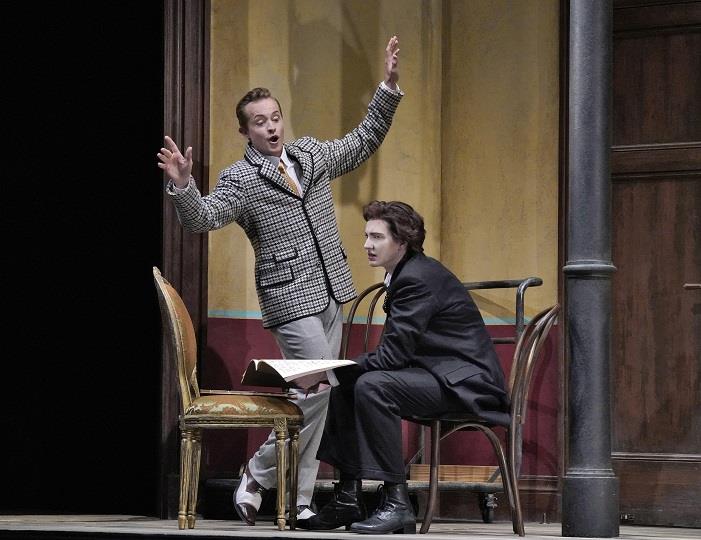 As Ariadne, Amanda Echalaz spent much of the opera genuinely oblivious to anything outside her own sorrow; although her two arias near the beginning contained passages of lucidity and depth, her performance seemed to gain in intensity after the arrival of Bacchus. Bruce Sledge had an ideal tone for Bacchus, somewhere between lyrical and heroic; if his early addresses to Circe sounded hasty, his contributions to the concluding duet achieved a more expansive splendour. And Liv Redpath provided the evening with a thoroughly charming Zerbinetta. Her scene with the composer in the prologue was remarkably free of calculation, and she made the bold choice of delivering her aria in the opera proper not as a piece of self-advertisement, but as a heartfelt plea to Ariadne; the trills and coloratura passages were rarely overstated or pitched explicitly to the audience, but the top end of her range had an exquisite lightness and clarity. Her scenes with the dancers were more conventional, but in her two most important scenes Ms Redpath provided Zerbinetta with an unexpected tenderness.

The evening’s two finest performances belonged to the Composer and the conductor. Amanda Majeski – who sang the Countess a few years ago in Mr Albery’s Capriccio – was, on this evening, in a class by herself: her Composer was a flawless creation of youthful vulnerability and unshakable idealism, conveyed through an awkward physical manner and complete vocal confidence. There was little pretention in her actions and gestures: her continual mood swings and compulsive revisions to the score all seemed to originate from an untameable artistic impulse. Yet the true nobility of the character emerged in Ms Majeski’s stunning mid-range passages that seemed to grow even fuller and rounder as she moved up toward the higher notes.

Yet the evening’s greatest asset may have been James Gaffigan, who led the smallish orchestra of around forty musicians through an intimate, beautifully proportioned performance of the score. The prologue boasted considerable warmth and an understated exuberance that followed the twists of the action without forcing them. Mr Gaffigan’s command of pace and assurance of phrase was equally evident throughout the opera proper; he provided Ariadne’s lamentations with a languid, elegantly sculpted accompaniment, captured the anarchic arrival of the dancing troupe without overstating it, matched Zerbinetta in effervescence, and brought the evening to a moving conclusion with a long, slow build to the ecstasies of Bacchus and Ariadne.

If Mr Albery’s thoughtfully conceived and beautifully executed staging was a delightful investigation into the many oppositions von Hofmannsthal was able to fit into his libretto, it was the singers, the orchestra and Mr Gaffigan who demonstrated the mastery with which Strauss was able to corral comedy and tragedy into a unique coexistence. The Santa Fe Opera has always had a special relationship with Strauss – they have given the American première of six of his operas, and only Mozart has been performed more frequently – and their newest Ariadne was, in every way, a triumphant extension of that distinguished tradition.