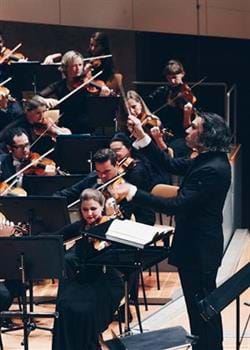 It is perhaps an unfortunate irony that the elements which allow Die Frau ohne Schatten to occupy a place of unique greatness among Strauss’ stage works are the very factors which can make it so difficult to stage. Not that the intricate, large-orchestra scoring, thematic complexities, and ambitious action have made Die Frau a rarity over the past half-century: so long as there are two great sopranos committed to the central roles, it will always find an audience. But performances are almost invariably subjected to extensive cuts, especially in the third act, and the physical demands of even the best staging can overshadow the subtleties in the score.

An argument could be made for Die Frau being one of the great headphone operas: Strauss had such a skill for conjuring supernatural flourishes while guiding us through the emotional journeys of the characters that, with a good recording and a decent stereo, the opera can come to life far more vividly in the imagination than when bound to the stage. Vladimir Jurowski’s understanding of how the story can play out in the mind was crucial to the concert performance over which he presided as part of this year’s Musikfest. With the Rundfunk-Sinfonieorchester Berlin on excellent form and a solid ensemble cast, Mr Jurowski fashioned a taut drama without losing sight of the myriad subtleties and peculiarities that make Die Frau an unquestionable masterpiece.

The evening’s strength lay in Mr Jurowski’s ability to balance detailed orchestral textures with a dynamic sense of narrative momentum. Mr Jurowski is, of course, well known for his work in the opera house, but in the auditorium of the Philharmonie, without the additional considerations of set changes and stage action, he seemed more free to make minor adjustments in tempo that highlighted the drama inherent in the score. Not that his direction ever came across as disjointed: indeed his command of individual scenes often seemed governed by a large-scale understanding of the shape of each act. The first act, especially, was a marvel of long, patiently constructed gradations. From the profound stillness of the falcon’s warning, Mr Jurowski built slowly and methodically toward the frantic preparations of the nurse and Kaiserin for their journey to the mortal world; the ferocious Erdenflug interlude led directly into a high-intensity argument between the brothers, but the mood began to mellow almost immediately in anticipation of the tender scene between Barak and his wife.

If not all of Mr Jurowski’s interpretive decisions worked equally well, there was little in his reading that seemed impulsive or unjustified. The quick pace of the Kaiser’s second act monologue seemed initially indifferent to the air of magical serenity that sets the scene for the violent despair to follow, but as the scene progressed a strange logic revealed itself. The orchestra responded well to Mr Jurowski’s direction, providing attentive, elegant ensemble playing throughout the evening. The solo violin introduction to the Kaiserin’s monologue in the third act was deeply lyrical, the trombones gave an imposing weight to the darkness that falls on the final scene of the second act, and the woodwinds ranged from beautiful to mildly sinister when conjuring the birdsong that accompanies the Kaiserin’s first appearance. If some of the most climactic scenes couldn’t quite maintain perfect clarity, Mr Jurowski always kept chaos in check, and even some of the most challengingly dense passages – notably the layers of percussion which evoke the watery end of the second act – emerged wonderfully rendered.

What elevated the evening, however, was Mr Jurowski’s decision to perform the score almost entirely uncut. It is rare to see a staged performance that doesn’t make some attempt to trim the second act, and in the third, the brutal truncation or complete omission of certain scenes is sadly the norm. On this evening, however, we were treated to the complete scene in which the Kaiserin breaks with the nurse, the nurse’s attempts to thwart Barak and his wife, and the entirety of the Kaiserin’s climactic confrontation with her (invisible) father and her conscience. Instead of coming across as unwieldy or meandering, the third act emerged with a far greater sense of formal balance; the drama of the two couples felt more evenly weighted and the music itself flowed more naturally towards its ecstatic conclusion.

Although the singers came and went from the auditorium, sometimes appearing on the high terraces for acoustic effect, there was no attempt at dramatic direction and the singers, for the most part, devoted their attention to matters of vocal nuance. As the Färberin, Ricarda Merbeth showed little in the way of outward emotion, but her obvious investment in the character made her scenes the most captivating of the evening. She sang with delightful precision when taunting her husband – which accounts for much of the first two acts – but her delivery came nowhere close to hectoring caricature. Indeed there was a sense of barely suppressed anger and fear that illuminated her interactions with both Barak and the nurse, but in the climactic moment of the second act she summoned a glowing ecstasy that rendered her sudden emotional conversion not merely plausible but inevitable.

If Thomas Johannes Mayer’s Barak seemed more intelligent and less complacent than one is used to hearing, his elegance of line and tone conveyed the character’s essential appeal. He remained completely in character throughout the evening, and his expressive physical manner provided a pleasing complement to his vocal presence. In the second act he grasped at the music stand in apparent stupor in the scene where Barak is drugged by the nurse, eventually collapsing onto a chair in pretend sleep, yet his groggy reawakening moments later gained its force through vocal nuance alone. His reaction to his wife’s revelation at the end of the act was terrifying in its anger, but the penitent ‘Mir anvertraut’ in the first scene of the third act returned to a mode of convincing tenderness.

Anne Schwanewilms had an appropriate clarity and purity of tone for the Kaiserin – especially in the higher, quieter passages – but despite several good scenes, her performance never quite established an emotional through-line for the character. Her best scene was the solo monologue in the third act, which conveyed a palpable anguish but seemed somehow disconnected from the action leading up to it. It was difficult to tell if Torsten Kerl’s projection was slightly overwhelmed by the might of the orchestra, or if he was simply trying to avoid the obvious trap of turning all the Kaiser’s scenes into Heldentenor set pieces. Certainly his way with the text was appealingly natural, and the resulting character emerged with an unusual intelligence and refreshing lack of bluster, despite being on the quieter side.

As the nurse, Ildikó Komlósi had no difficulties with projection, but there were several moments in the first act where she leaned too heavily on dynamic shifts as a strategy for vocal expression, resulting in passages that sounded a touch wayward, and a few moments that seemed overemphatic. Her approach worked far better in the third act where her exertions came across as the increasing despair of someone trying and failing to keep her plan from falling apart. The smaller roles were generally well cast, with the trio of Christoph Späth, Tom Erik Lie and Jens Larsen remarkably good as Barak’s brothers.

For all the component parts that must necessarily go into any performance of Die Frau –including a glass harmonica, a wind machine, and numerous small vocal ensembles who appear and disappear just as suddenly – the chief attraction is inevitably the score itself. While it can be a spectacular and cathartic work on the stage given the right production, the level of detail is great enough that it loses very little in concert performance. On this evening, whatever sense of narrative drama we may have missed from the absence of sets and costumes was more than offset by the rare chance to hear the opera performed in its fullest and finest form, without the cuts that can make staged performances so frustrating.