The Sound of the Suburbs 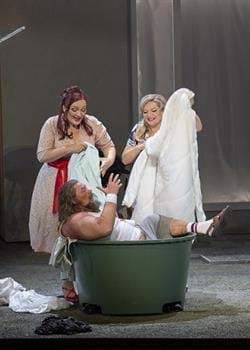 Otto Nicolai has a street named after him in Berlin’s Komponistenviertel, where he keeps company with Mozart, Beethoven and Gluck; his name appears among the immortals in opera houses and concert halls throughout Europe. It is less common to find his name in concert programmes or on record shelves. Born in 1810 and gone by the age of 39, Nicolai enjoyed a partially successful career in Italy and Vienna before coming to Berlin to take up the position of director of the Prussian Royal Opera (the precursor to today’s Staatsoper). He died only two months after the première of Die Lustigen Weiber von Windsor, his only opera written to an original German language libretto, and much of his work fell quickly into the obscurity where it remains today. As with Weber, who died at the same age, we are left to wonder what Nicolai might have achieved with better libretti and another few years.

The new production of Die Lustigen Weiber, which opened the Staatsoper’s 2019–20 season, provided an elegant overview of the work’s numerous charms without quite overcoming its limitations. David Bösch’s well-conceived, well-executed staging revelled in the libretto’s potential for physical and situational comedy while Daniel Barenboim’s musical direction had an effervescence that, at various points, suggested Rossini without the invigorating showmanship, or Weber without the fascinating undercurrents of darkness. The evening was unfailingly genial and largely undemanding, a skilfully wrought entertainment that couldn’t quite break free from the safety of the opera itself.

David Bösch’s visually appealing staging transplanted the action from sixteenth century Windsor to a drab edge-city suburb of semi-detached concrete houses, inexpensive patio furniture and laundry lines; the chunky cassette walkmen clipped to the belts of Anna and Fenton seemed to place the action sometime around the early eighties. If the setting had the potential for an undercurrent of nihilistic bleakness, it was largely overshadowed by the assortment of cartoonish characters who lived there: the day-drinking housewives and their slightly dim husbands – the self-satisfied Reich, concerned primarily with his daughter’s marriage, and the boorish Fluth obsessed with his wife’s (imagined) infidelity – the two-dimensional suitors, and the earnest young lovers all emerged with a sitcom familiarity.

The outlier and ninth wheel in the opera’s tidy arrangement of opposites was Falstaff. With a fat-suit to make Orson Welles in Touch of Evil look svelte, his first lumbering appearance could just as convincingly have been accompanied by the entry of the giants from Das Rheingold. Yet the character’s prodigious bulk only underlined the fact that neither librettist Salomon Mosenthal nor Mr Bösch, nor even the charismatic René Pape seemed quite sure what to do with him. The Falstaff who heaves his way through the taverns and battlefields of the Henry IV plays is very different from the figure who appears in Windsor at the beginning of Shakespeare’s Merry Wives, and the Falstaff whose indiscriminate (and unexplained) attempts at womanising set Mosenthal’s libretto into action is yet further removed from the original: stripped of all defining characteristics apart from his fondness for drink, we could hardly imagine this lumpen figure embellishing his exploits at Gad’s Hill or justifying his unique conception of honour.

Falstaff does not drive the action of Die Lustigen Weiber nor, in this production, was he used to expose the hypocrisy around him, yet the considerable void of uncertainty created by his presence was only partially filled by the other characters. The courtship rituals of the young lovers had a nostalgic sweetness – at one point Fenton presented Anna with what appeared to be a mixed tape, the highest token of affection among members of a certain generation – but their part-time-punks wardrobe and earnest insistence on romantic love couldn’t quite erase the sense of a subplot tacked on to pad the libretto to opera length. Nor did Herr Fluth’s attempts to involve the townspeople in uncovering his wife’s ‘affair’ with Falstaff ever build to the necessary heights of comedic insanity; there is no doubt that Mr Bösch knows how to play frantic scenes at the very edge of madness (witness the second act of his Munich Meistersinger), and it seemed possible that the flatness in the concluding scenes of the first two acts may have originated in the libretto. 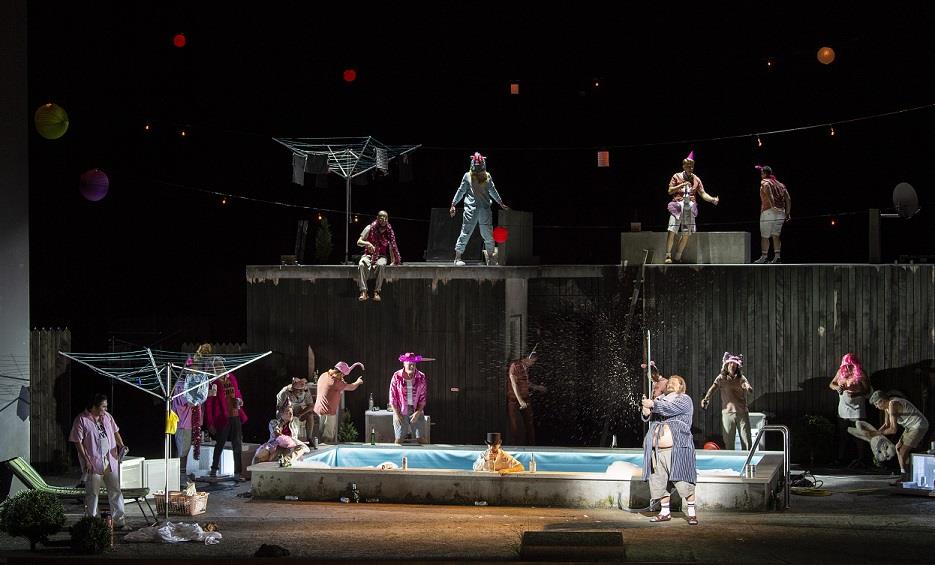 Yet there were enough inspired moments to offset the occasional stasis. The quiet poolside terrace shaking to sudden life at the beginning of the second act was a wonderful flourish, and the moonrise with spinning laundry lines that ushered in the procession of fairies injected unexpected beauty into the opera’s suburban world. It was, however, Mr Bösch’s treatment of the merry wives that provided the greatest source of irreverent delight; the constant scheming of Frau Fluth and Frau Reich, at once light-hearted and deadly serious, had an underlying honesty that made it the most engaging aspect of the production.

Yet the merry wives might not have achieved such preeminence had it not been for the inspired performances of Mandy Friedrich (Frau Fluth) and Michaela Schuster (Frau Reich). Ms Friedrich, especially, seemed wholly attuned to the nuance in every line, and her scenes emerged with equal parts vocal beauty and dramatic credibility. Her solo scene while waiting for Falstaff was caustic and witty, and she summoned a dizzying array of emotional manipulation techniques in the remarkable second-act confrontation with an enraged Herr Fluth. Yet she was at her finest trading quips and hatching schemes with her neighbour Frau Reich. Ms Schuster’s approach to the comedy was a touch broader, but her exaggerations never overshadowed her careful phrasing and dynamic presence. The duet between Ms Schuster and Ms Friedrich in the first act was not only one of the evening’s musical high points, but a sparkling display of vocal poise and comedic timing.

The unruly meeting of Michael Volle’s Herr Fluth (in disguise as Herr Bach) and René Pape’s Falstaff at the beginning of the second act was very much a distorted reflection of the concentrated synergy in the merry wives’ first-act duet, and the chance to witness these two charismatic singing-actors spar with one another was one of the evening’s great delights. Mr Pape gave the fat knight a healthy dose of empty, unflappable swagger; if the opera seemed reluctant to give Falstaff any of the best scenes, Mr Pape nonetheless led a rousing drinking song at the beginning of the second act and provided the fantastic elements of the third with a necessary anchor. Mr Volle, who was himself a memorable Falstaff in the Staatsoper’s recent production of the Verdi opera, was magnificently volatile in the opposing role of suspicious husband, barely containing the unstoppable forces of jealous rage battering at the façade of civic respectability. 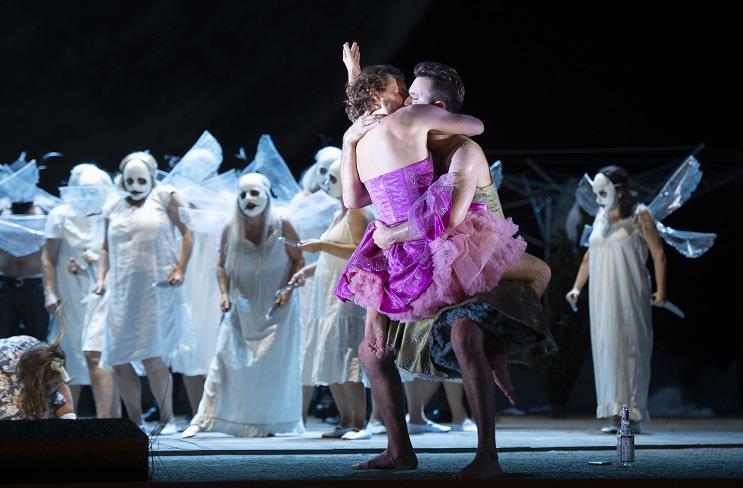 As Anna Reich, Anna Prohaska’s aria in the third act provided the evening with one of its few moments of human emotion, a brief interjection of ardent longing into the extended preparations for Falstaff’s comeuppance. Her duet with Pavol Breslik’s Fenton in the second act was also filled with disarming tenderness, even if Mr Bösch’s attempt to capture countercultural romance veered dangerously close to parody. Mr Breslik also shared an engaging scene in the first act with Wilhelm Schwinghammer’s pleasingly understated Herr Reich, although he was more distinguished crafting his elegant moonlit aria in the second act.

Daniel Barenboim knows how to set the bar remarkably high even before the curtain has gone up – recall his terrifying performance of Leonore No. 2 as the opening of Fidelio a few years ago, or last year’s supercharged Medée overture – and on this evening he turned Nicolai’s overture into its own dramatic microcosm, beginning with a breathtaking golden sunrise of calm and building to a series of increasingly vigorous episodes. Echoes of that vigour could be heard in the opera’s finest scenes even when the measured pacing remained deferential to the singers. If much of Nicolai’s music seemed calculated merely to forward the action in a good-natured fashion, Mr Barenboim was able to draw out the orchestral flourishes that gave the third act its fantastical character.

On the strength of Die Lustigen Weiber von Windsor alone it is difficult to say whether Nicolai would have become a major force in the world of music drama, but the Staatsoper’s new production certainly made a strong argument for his ability to construct a charming entertainment. The delicately balanced sweetness of the staging may sit uneasily with those who prefer their comedy with greater piquancy, but no one with any interest in nineteenth-century German opera will want to miss the opportunity to hear Nicolai’s score performed by such a distinguished cast, conductor and orchestra.