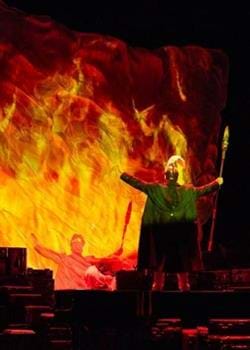 Stefan Herheim’s new Ring cycle for the Deutsche Oper Berlin was announced even before the final performances of Götz Friedrich’s now legendary ‘time-tunnel’ production in April of 2017, and the opening instalment, scheduled for June of this year, was one of the most highly anticipated new productions of the season. But after the COVID pandemic forced theatres to close until the end of Summer, it became apparent that Walküre and not Rheingold would be our first glimpse of Mr Herheim’s vision. The task of assembling the Deutsche Oper’s first new Ring cycle of the twenty-first century in the shadow of Friedrich’s beloved production cannot have been easy – and the complications of a global pandemic certainly didn’t make it easier – but Mr Herheim’s deeply intelligent and meticulously directed Walküre was a triumph that bore the unusually heavy weight of expectation gracefully.

Although many of the images in this Walküre may have drawn on conceptual threads from Mr Herheim’s yet-unseen Rheingold – we will, alas, have to wait another few years to see the whole cycle in order – the staging stood admirably on its own. This was due partly to Mr Herheim’s strong delineation of the battle between divine fate and free will at the heart of the story, and also to the extraordinary stage set, enlivened only occasionally (but always effectively) by ropes, smoke and other bits of stage magic. Mostly, however, it was Mr Herheim’s attention to the granular detail in the drama – not merely scene to scene, but beat to beat – that kept the story taut from beginning to end. Every moment, every movement and every glance seemed thoroughly considered, and at no point was one left with the sense that the singers had been set down on the stage and left to fend for themselves.

The first act was set against what appeared initially to be the partial remains of a circular castle wall, but closer inspection revealed that the structure was constructed entirely of dark-brown leather suitcases. Luggage also formed the building blocks of the rugged, organic landscape that served as backdrop for the next two acts, and the motif was picked up in the assortment of valises that appeared in the hands of the silent chorus of refugees who clustered at a respectful distance from Wotan whenever he was on stage. Regardless of whether or not the suitcases were the continuation of an element from Rheingold, they did an excellent job of mirroring the sense of desperate flight that pervades the opera: Siegmund from his pursuers, Siegmund and Sieglinde from Hunding, Brünnhilde from Wotan, Wotan from Fricka and the inevitability of his End. 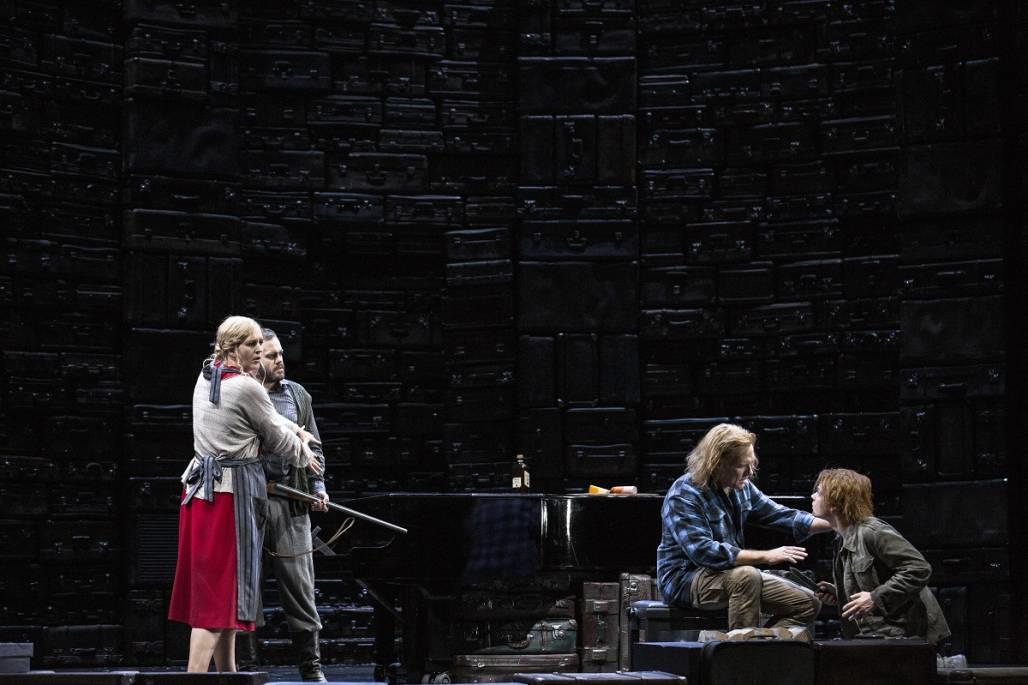 At the centre of the stage was a piano, from which various characters and objects emerged, and on which Wotan occasionally mimed along to the music from the orchestra. It was the piano – along with the score of Die Walküre which Wotan could be seen carrying when he emerged from the prompter’s box at the beginning of the second act – that introduced one of the production’s central concerns: the relationship of the various characters to fate. Wotan was a director-god rather than a creator-god, and while he could use his influence to position the human characters – who remained largely unaware that they were being manipulated by higher forces – his actions were limited by what had been predetermined in the text. (The theatrical analogy, further reinforced by Brünnhilde’s shield which resembled a large tragic mask, was highly developed but never overstated, an intriguing facet of the production rather than its sole concept.) It was Wotan’s frustration at being trapped by what was written – the notes of the score and the runes on the spear shaft amounted to the same thing – that filled him with the desire to create a being with free will; he seemed unaware, however, that it was Brünnhilde, not the Volsungs, who had developed the capacity for independent thought, and it was his anger at her newfound agency that gave the final act its intense dramatic drive.

If Mr Herheim’s own direction stayed remarkably close to the music and libretto, he was certainly not afraid to make his own additions. The most conspicuous of these was a mute, feral child belonging to Hunding and Sieglinde, whose fate gave Sieglinde’s madness in the second act far greater plausibility, but which also opened up new dramatic possibilities for the long, slow dinner table confrontation in the first act. Yet for all the attention given to the actions of the characters, Mr Herheim’s greatest strength was his ability to invest ordinary objects with complex meaning: when Brünnhilde appeared to Siegmund in the second act she carried a long piece of white silk, and the entirety of their meeting played out less through personal interaction than through their shifting relationship to this inert and seemingly featureless object. Much like the suitcases, the white silk – which appeared elsewhere in the staging and was reflected in the white underclothes to which all of the characters (except Hunding) were stripped at some point in the course of the evening – functioned as a visual analogue to Wagner’s own leitmotifs, expressive ideas that could be repurposed and recombined to delineate the contours of each scene. The subtle, continuous reconfiguration of characters and objects is what gave this Walküre its satisfying depth. 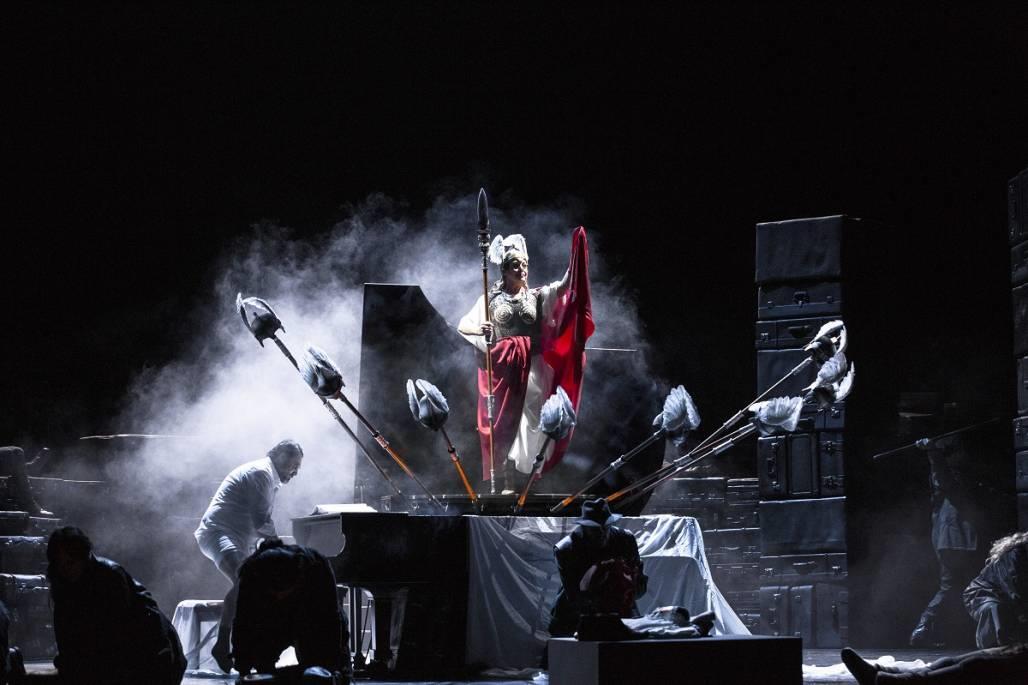 The production’s ensemble cast was nicely balanced with no obvious weaknesses. Nina Stemme’s Wagnerian credentials are well-established, yet on this evening her Brünnhilde was all the more impressive for drawing almost no attention to the singer beneath the character. There were no idiosyncrasies and no obvious displays of technical prowess; instead her performance was unfussy, articulate, and wholly subservient to the drama. If she was willing to cede the spotlight to Wotan or Siegmund in the second act or Sieglinde at the beginning of the third, she also built the intensity of her own performance so steadily – and stealthily – that her final scene with Wotan was perhaps the finest of the evening. Ms Stemme also seemed most at ease with Mr Herheim’s busy directing style, and her assured, natural manner remained unruffled in even the most demanding scenes. As Wotan, John Lundgren was far from the blustery, force-of-nature that one often hears, yet there was an intelligence and humanity in his delivery that allowed him to achieve the nearly impossible feat of making every line of the long narration to Brünnhilde in the second act seem absolutely vital; if one remained sceptical of his towering rage at the beginning of the third act, there could be no doubting the anguished tenderness in his beautifully sung farewell.

As Sieglinde, Lise Davidsen delivered perhaps the evening’s most captivating performance, with a voice that seemed to grow more secure and full-bodied as it moved up to the higher notes. One had a sense that the measured pace of the first act held her back from more fulsome expressions of ecstasy in the final scene, but in the second and especially the third acts her anguish was commanding. Her physical performance was hardly less impressive, moving convincingly from despair to hope to inflamed passion in the first act, but rendering the madness of the second act with a refreshing lack of hysterical mannerism. Brandon Jovanovich’s warm, dark-toned tenor resulted in a Siegmund that favoured melodic expression over bracing heroic power. His sword monologue may have stopped just short of elemental fervour and his expressions of love for Sieglinde at the end of the first act seemed a touch measured, but in his most intensely focussed scenes – the tale of how he lost his weapons or the solemn encounter with Brünnhilde – there was compelling dramatic force. 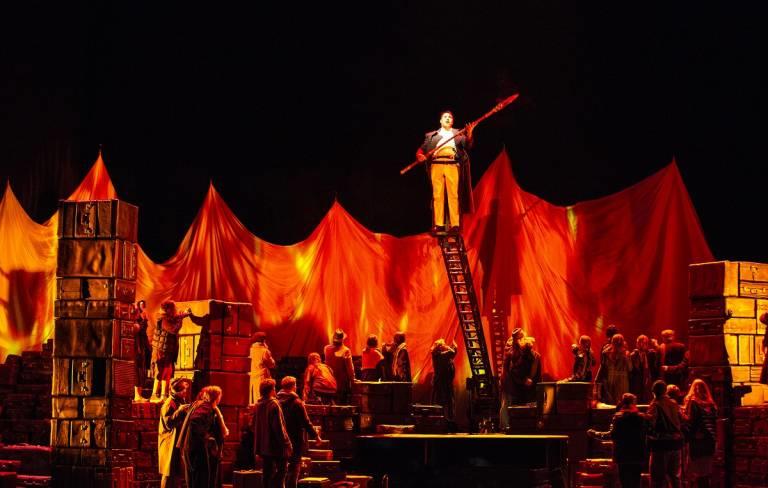 Andrew Harris provided the evening with a pleasingly disagreeable Hunding, and Annika Schlicht was severe and implacable as Fricka; although there was greater emotional range in her excellent Rheingold Fricka (which she performed in June as part of the Deutsche Oper’s open-air staging) the sting of infidelity and betrayal could still be felt in her brief encounter with Wotan. The production also boasted an uncommonly ebullient ensemble of Valkyries who collectively managed to locate the absurd humour in the opening of the third act while simultaneously infusing it with its requisite majesty.

Donald Runnicles’ reading of Die Walküre has remained fairly consistent over the past decade and performances under his guidance tend to be low on idiosyncrasy and high on taut narrative pacing. If he rarely lingers over passages, and certainly never loses sight of the larger structure of each act, there were a few moments on this evening, perhaps most notably the final scene of Act 1, where one wished for a less deliberate pace and bit more in the way of foolish passion. Yet these moments were outweighed by the roiling of the orchestra as it rose to meet Wotan’s shame, the hypnotic quiet that accompanied Brünnhilde’s appearance to Siegmund, and the bracing fury of the Valkyrie scene. The brass section, who are central to Mr Runnicles’ Wagnerian sound world, were on notably fine form.

Yet for all the strong performances – and notwithstanding a few highly misguided sounds of disapproval from the back of the hall at the end of the evening – the success of this Walküre belonged very much to Mr Herheim’s exacting vision. The depth of his thematic insights and the elusive, constantly shifting nature of his stage imagery gave the production a multi-faceted richness that one suspects will continue to evolve and mature with each subsequent viewing. If the remainder of Mr Herheim’s cycle lives up to the promise of Die Walküre, it will sit comfortably alongside its Deutsche Oper predecessor in the pantheon of great Ring productions.